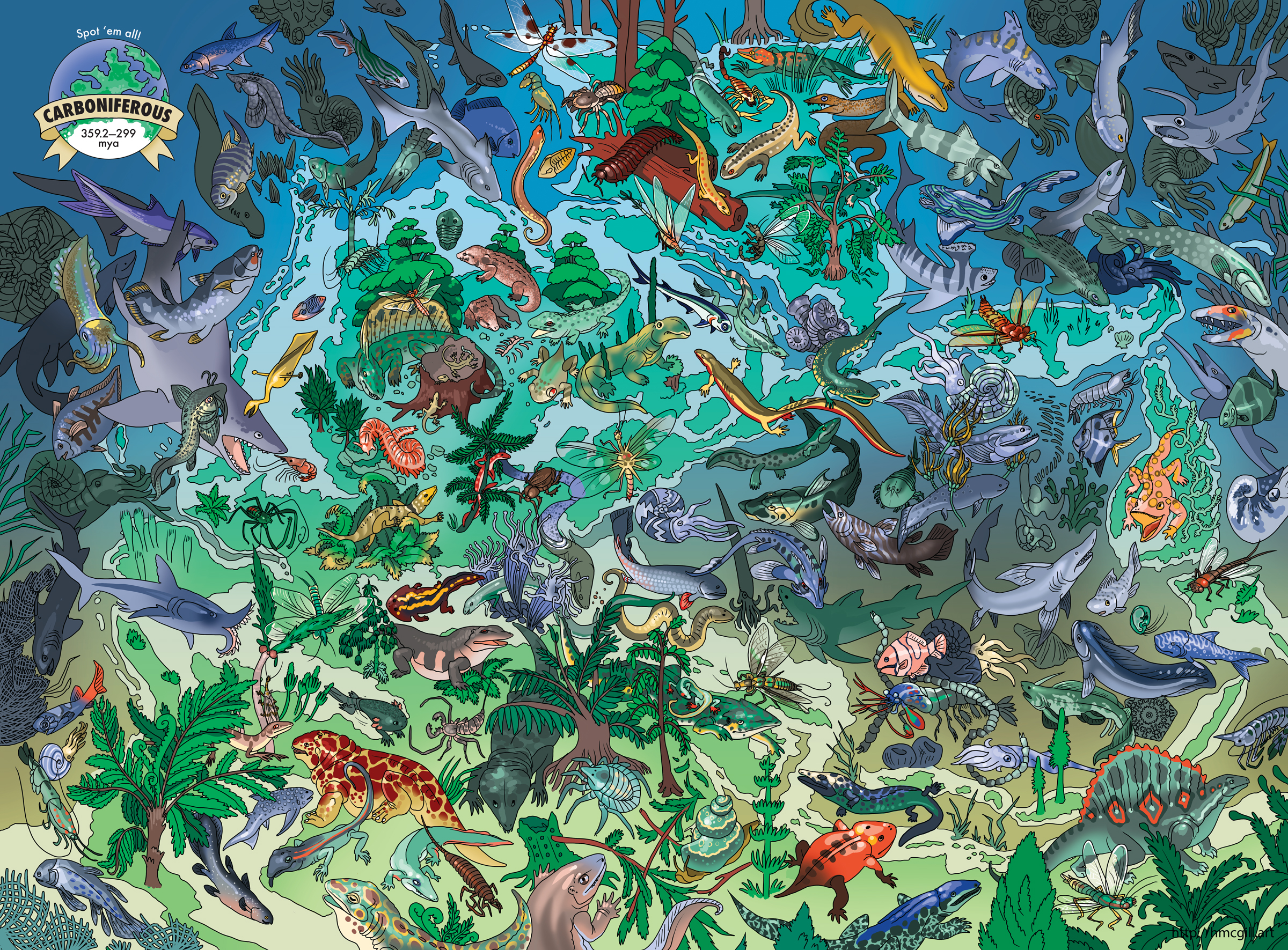 As it turns out, a person can fit a lot of stuff into an 11×14 inch double-page spread. How much, I didn’t realize, until I set out to create an example illustration for a picture book concept that I thought up. The idea is for kids to browse expansive eye-spy pages for their favorite animals throughout natural history, and maybe discover new favorites. The final book would contain a spread for every geologic time period in the history of Earth, and perhaps feature subsections of those time periods. I wasn’t sure if I would be able to pull something this complicated off, but I’ve established a workflow for making more of these illustrations when I move forward with this project. 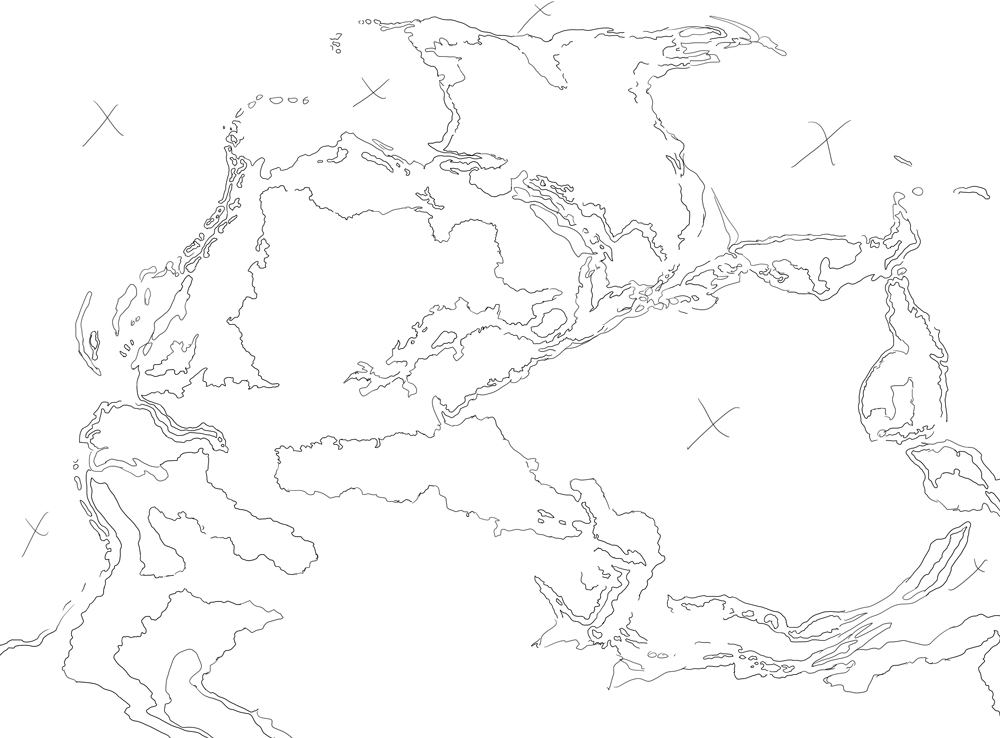 1. Sketch
First, I made a best-guess sketch of what continents looked like during the Carboniferous, cross-referencing maps. Ideally I would be able to trace a Creative Commons or open-source map, but there were none to be found. Above graphic is an approximation of what the first sketch looked like, before I went back and refined it again. I have either deleted or lost the original map I drew in the list of 800 or so layers used producing this image. (whoops!) 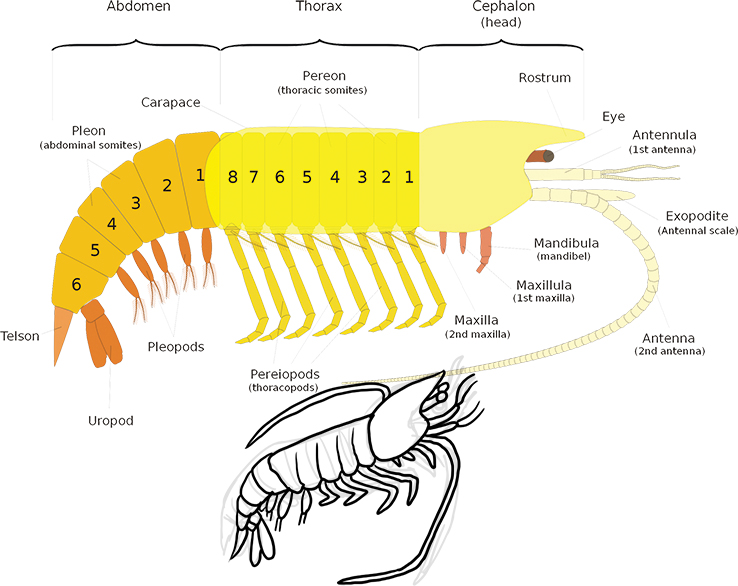 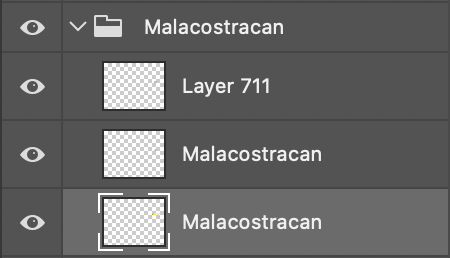 2. Research
Each organism is contained in a named layer folder. The folder contains visual reference first, then will eventually hold the sketch and the final lineart.

It’s best if I do all of the research in one go, rather than switching from research to drawing intermittently. I trawled Wikipedia mostly, as the site requires citations and sources, plus it offers plenty of open-source visual resources. I also look at paleontology fansites and wikis where possible, because there is an enthusiastic fanbase of people devoted to compiling and sharing updated natural history research. Ideally I would want a consultant with more of a research and natural history background to help me with this, but for the time being, it’s just me, doing what I can with the resources I can access. 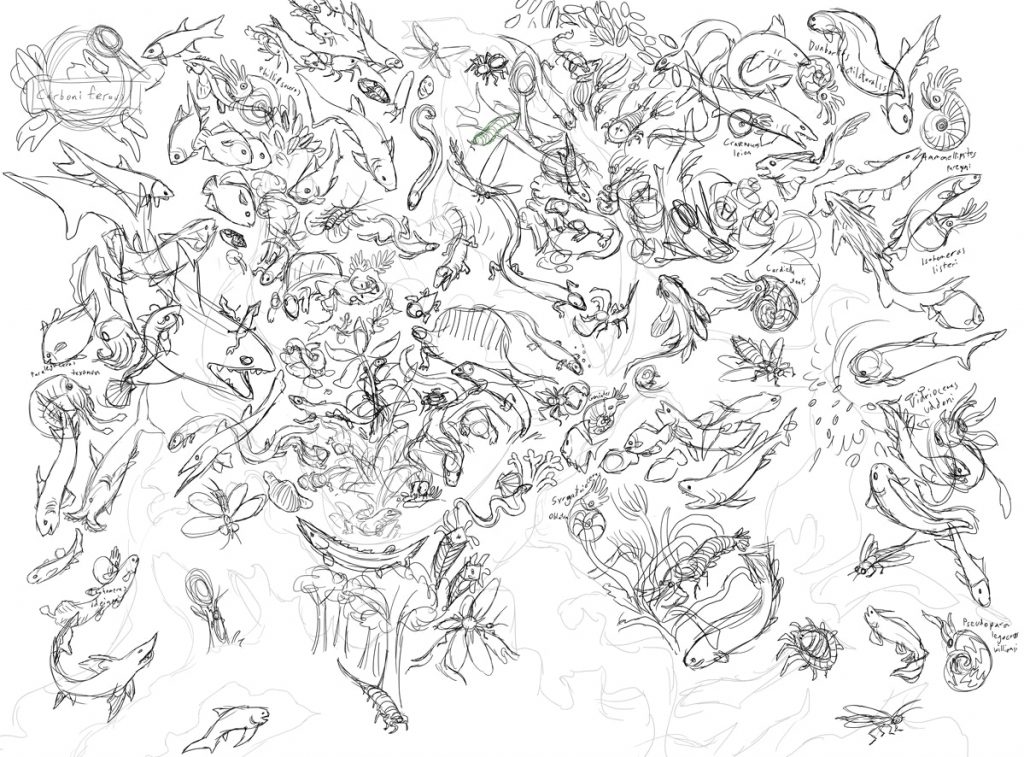 3. Sketch, again
After drawing the landmasses and using them to place organisms in spots where they mostly made sense, I studied each bit of visual research I can find. I used the name of the organism to search for additional reference if necessary, so naming my layers was extremely important here. I’m mostly looking at pose and size of each organism as I sketch. If there were ways to make the creatures interact with environments or with each other, I incorporated that too, for variety. A lot of this is speculative but I based it off of things I’ve seen real animals do today.

[image of tangent, or viewer flow through the piece]

4. Tweak composition
Once everything’s sketched, I bonk critters around to avoid the dreaded tangent. There’s a lot of organisms so they either need to be crossing over each other clearly or placed far enough apart that they’re not interacting. Typically the viewer needs to be able to see the head and tail tip of each creature to be able to tell what it is.
Something I have on the docket to try is compiling creature silhouettes as a check-off list and see if kids can look at the silhouettes, then find the creature depicted on the page. My goal is for the reader’s eye to travel all around the page, through all the creatures, without running into blocks or walls. 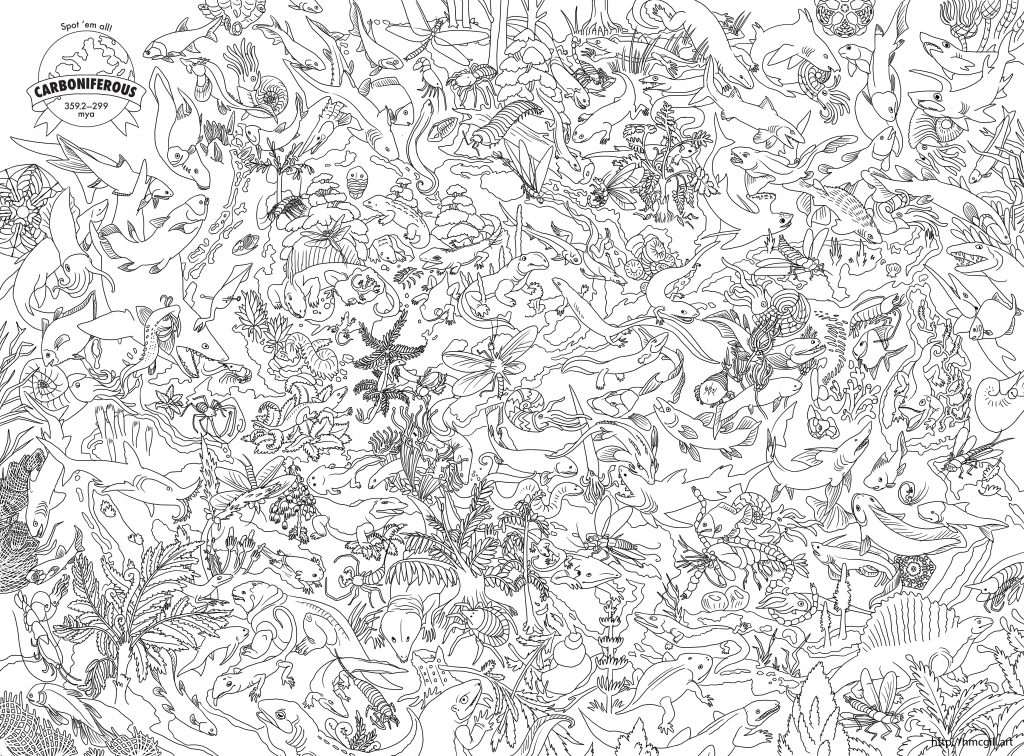 5. Lines
Each creature gets its design tightened up with clean lines in rich black at 5px on 1200dpi, prepped for coloring. I keep an older version of the completed lines, then merge all the lines into one layer on a new version of the layered photoshop file. 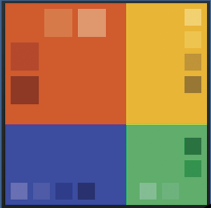 5. Colors
I generated a palette containing two warm colors (orange and yellow), an intermediary color (green) and a cool color (blue). The blue and the intermediary green were used to create a background that would remain behind the critters and pop them out more. Sea creatures were given mostly cool colors, and land creatures were given the warmest colors. I want viewers to perceive both individual animals on a small level, but also the entire map of the earth of this time period (Carboniferous) because it’s so different from modern times. 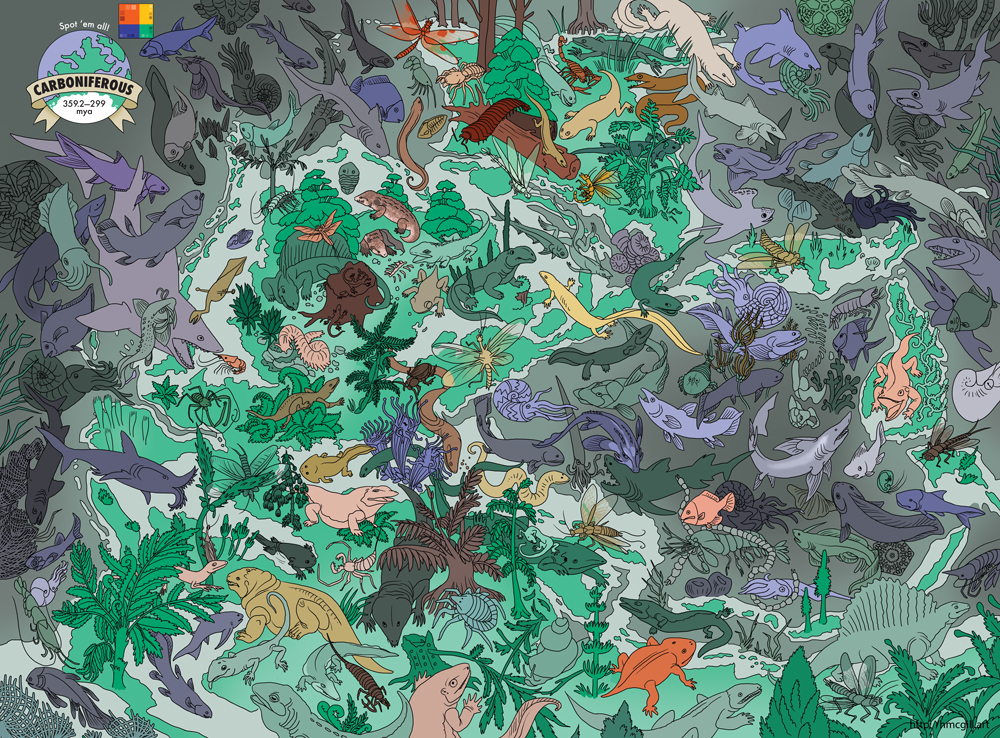 Next, I flatted all the colors on one layer under the lineart. This keeps the filesize somewhat manageable and makes it easier to select blocks of color for detailing. 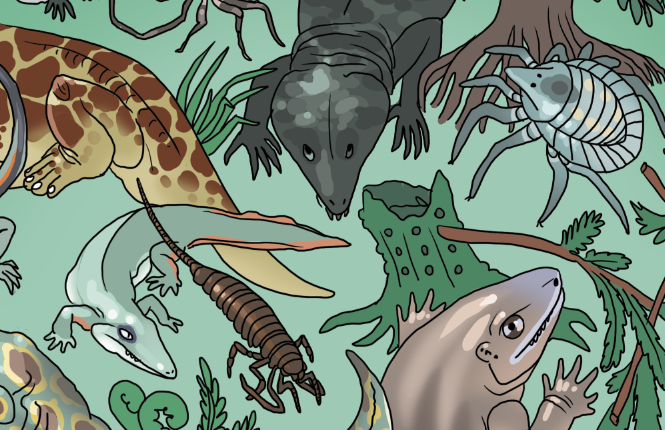 Organisms had highlights and detailing applied based on what aspect of them I wanted viewers to spot first. Mostly this was facial features, but some organisms have cool weird bits to them that we don’t see in the modern day. The colors are extremely speculative for lack of scientific evidence otherwise, and for this audience I leaned colorful/patterned rather than restraining myself. 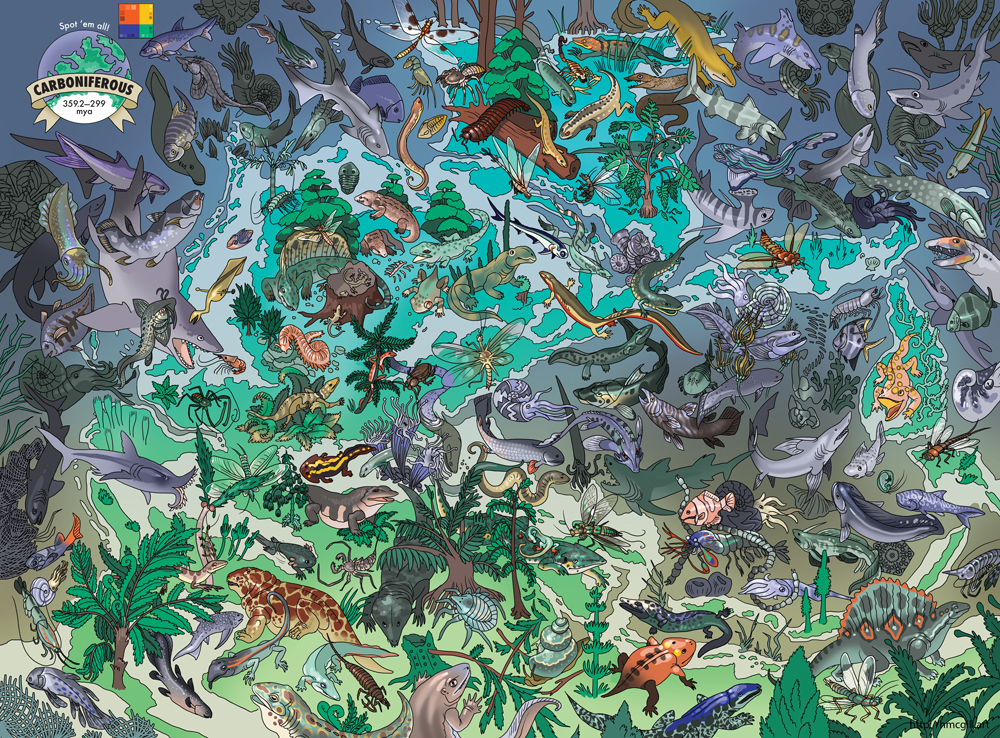 6. Gradient overlay
My initial colors were fine but a little flat-looking. In order to add depth without overwhelming the viewer with detail, I added gradients set to Overlay on the background only. Now the bottom of the page looks like it’s angling closer to the viewer, because I used yellow there, and blue on the background.

7. Hue/postproduction tinkering
Finally, there was a little bit of this, which Photoshop does well. I amped up the vibrancy to make the page feel like it’s bursting out of its bounds.

What’s next?
Are you interested in advising me on natural history, and/or picking up this kidlit midgrade picture book concept for publication? Let me know. The workflow is in place, ready to go.

Color Theory: Warm Temperature Colors
When thinking about how to evoke ‘colorful’, many aspiring colorists throw every hue they can think of onto a scene, resulting in chaos. A seasoned colorist knows it’s not about how many colors used in a piece, but how the selected colors relate to each other. One aspect that helped me grasp this concept was color ‘temperature’, particularly with warm colors.

Reds, oranges, and yellows are typically the warmest colors in a piece, with yellow being the warmest of all. These warm colors tend to occupy the foreground.

Now let’s remove some of these colors and see how they read.

Yellow is the warmest possible color. The human eye typically loses sight of yellow at the furthest possible distance. Yellow is used to create warning signs that can be easily perceived at a distance on the road for this reason. It’s a color that jumps to the foreground. How the blue and green look in comparison to the yellow…They function as ‘cooler’ colors. Arranging them in stacks alters the viewer’s perception of distance.

Which of these seems like it’s in order from back to front? Front to back? Out-of-order? The temperatures of a color correspond to the space it occupies in a composition, whether that’s the foreground, background, or midground.

To look at slightly different color scheme, this contains green, blue, and purple. Without yellow, can we still tell which is the ‘warmest’ hue? Compared to blue, which is the coolest temperature color, or purple, which is also a very cool color, green pops out the most.

This is because green is the closest color to yellow within the context of restricting ourselves to these three colors. When there is no yellow present, green takes over the role as ‘warmest’ color and jumps to the foreground. To compare, here is a yellow-green-blue composition next to a green-blue-purple composition.

Maybe one of these color schemes suits you for tackling this big CC BY-NC 3.0 coloring page, or maybe you want to invent your own for the page while thinking about color temperature!