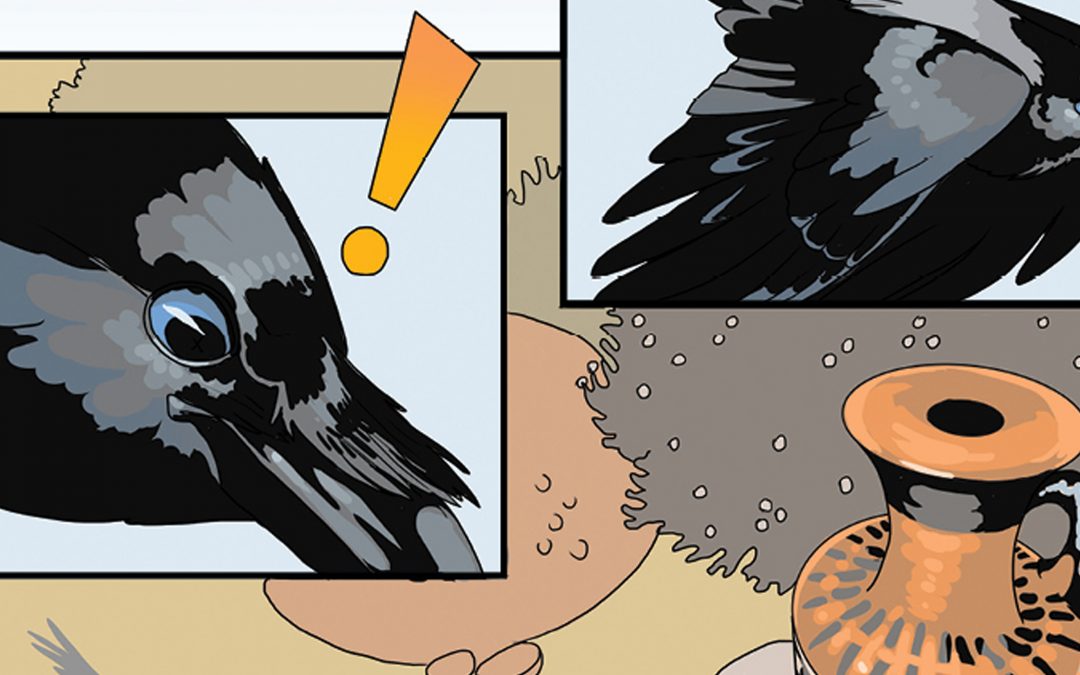 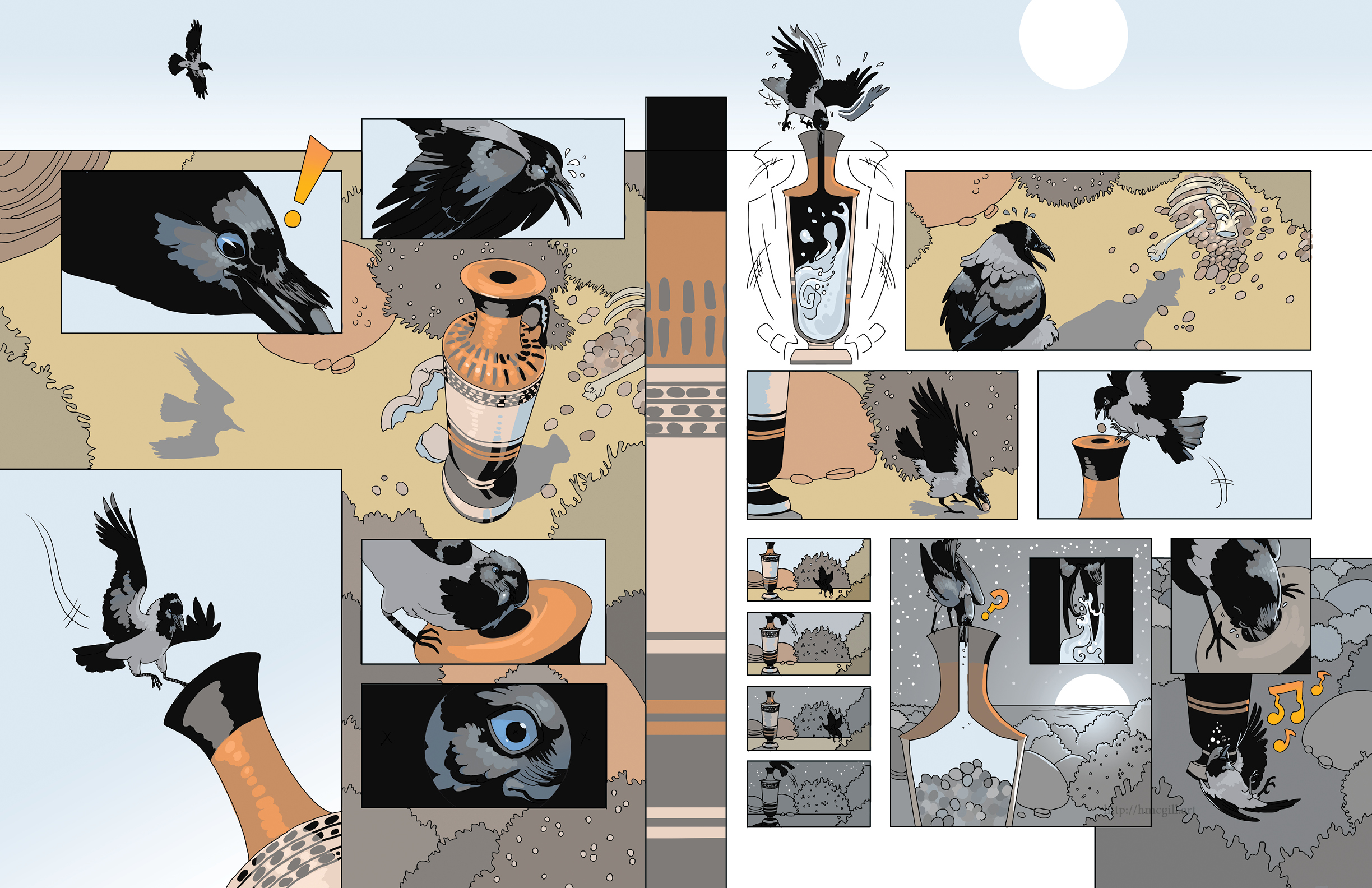 During a Push/Pull Graphic Novel Workout zoom class I took with David Lasky and Greg Stump, I was challenged to tell an entire story using only two pages. In this ancient story, a thirsty crow must be clever and work hard to survive a harsh desert environment. 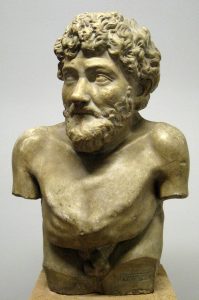 About Aesop
Yes, I know — if I fall into a research rabbit hole, I’ll never complete a comic. However, respecting the origins of this fable seemed like an interesting thing to do. Today we so often take these fables as always existing…something that just appeared, like magic, in our childhoods. Aesop was a real human being who used stories to gain favor from his fellow human beings, so I used his history as a pin to inspire the look of the overall comic.

This image from Aesop’s wikipedia article may or may not depict what Aesop actually looked like. Due to its easily editable nature, Wikipedia requires some double-checking, but the sources a Wikipedia article cites are always fairly solid. So, it’s okay to use Wikipedia as a starting point for research! I don’t have any plans for this short comic re: publication, so cursory research was fine for my purposes. 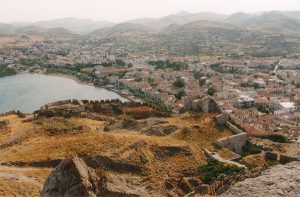 About the Setting
Aesop lived in ancient Greece, so I hunted for desert-like areas around that area and stumbled upon the island of Lemnos, Greece. It has lovely dunes, rocky outcroppings, and a fierce sun beating down. Perfect for dehydrating our crow-tagonist and forcing them to be clever. Maybe I’ll visit Lemnos someday! 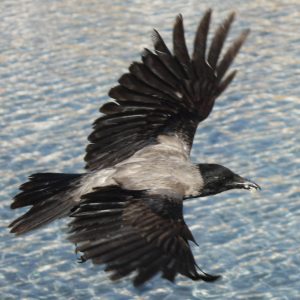 About the Crow
Most people would opt for your standard black crow. I definitely have a fondness for the beaky fellows because a family of them sets up shop in my backyard every year. However, corvids come in a lot of shapes and sizes, so I looked into what sort of crow might be hanging out on a Greek desert island. I found the Greece-native Hooded Crow and felt like its duotone aesthetic was quite nice. The dramatic shifts in tone across its feathers look sort of like the lekythos’s design.

Also interesting: Crows actually do drop pebbles into water to raise the level of it! They are clever problem-solvers. Even back in ~600BCE (Aesop’s time), people were making accurate observations of nature that still hold up today. Perhaps I should do a followup comic of Aesop grumpily discarding all the pebbles a crow put into his lekythos.

About the Jar
I could have just grabbed an amphora and been done with it, but I needed something that could stand upright on its own so that the crow could interact with it more. I trawled the Smithsonian Open Access collection and came across this lekythos. A little bit of simplification on the design so it wouldn’t overpower our crow, and there we go! A period-appropriate pottery prop. Aesop himself might have touched one of these.

More photographs of this piece from the National Museum of Natural History (NMNH) can be seen here. You’re welcome for the giant, sprawling rabbit hole that the site is!

Use Stories with Expired Copyright to Jumpstart Your Comics Portfolio
Say you’re not a writer. All you want to do is draw. You could hunt down someone to write a story for you, or you could wait for scraps of scripts from friends or writer’s blogs. But what if I told you, there’s a place where all the greatest works of literature from the past have been carefully digitized and proofread as ebooks…entirely for free? And which can be adapted as comics, even comics that can be sold? 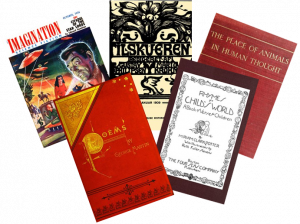 Works you might recognize that have expired copyright:
The Wizard of Oz series
The Odyssey
The Works of Mark Twain*

Project Gutenberg even has a ‘random’ button that will fetch you a surprise work from their vast selection. Get cultured!

*Twain reportedly fought for perpetual copyright extensions, so this one is pretty ironic.