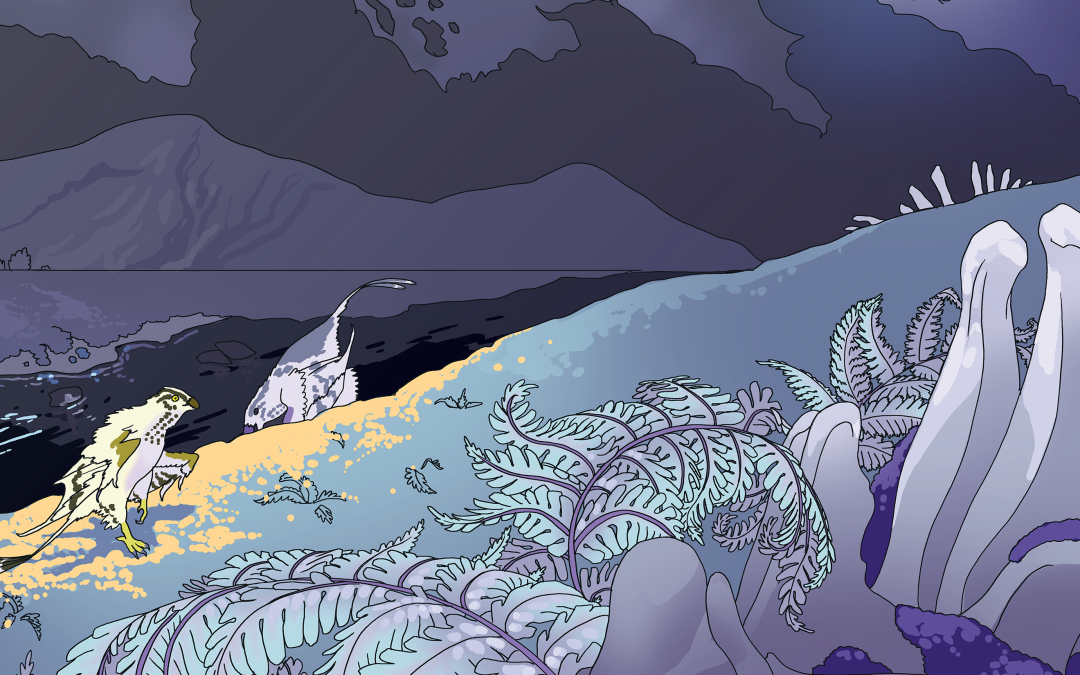 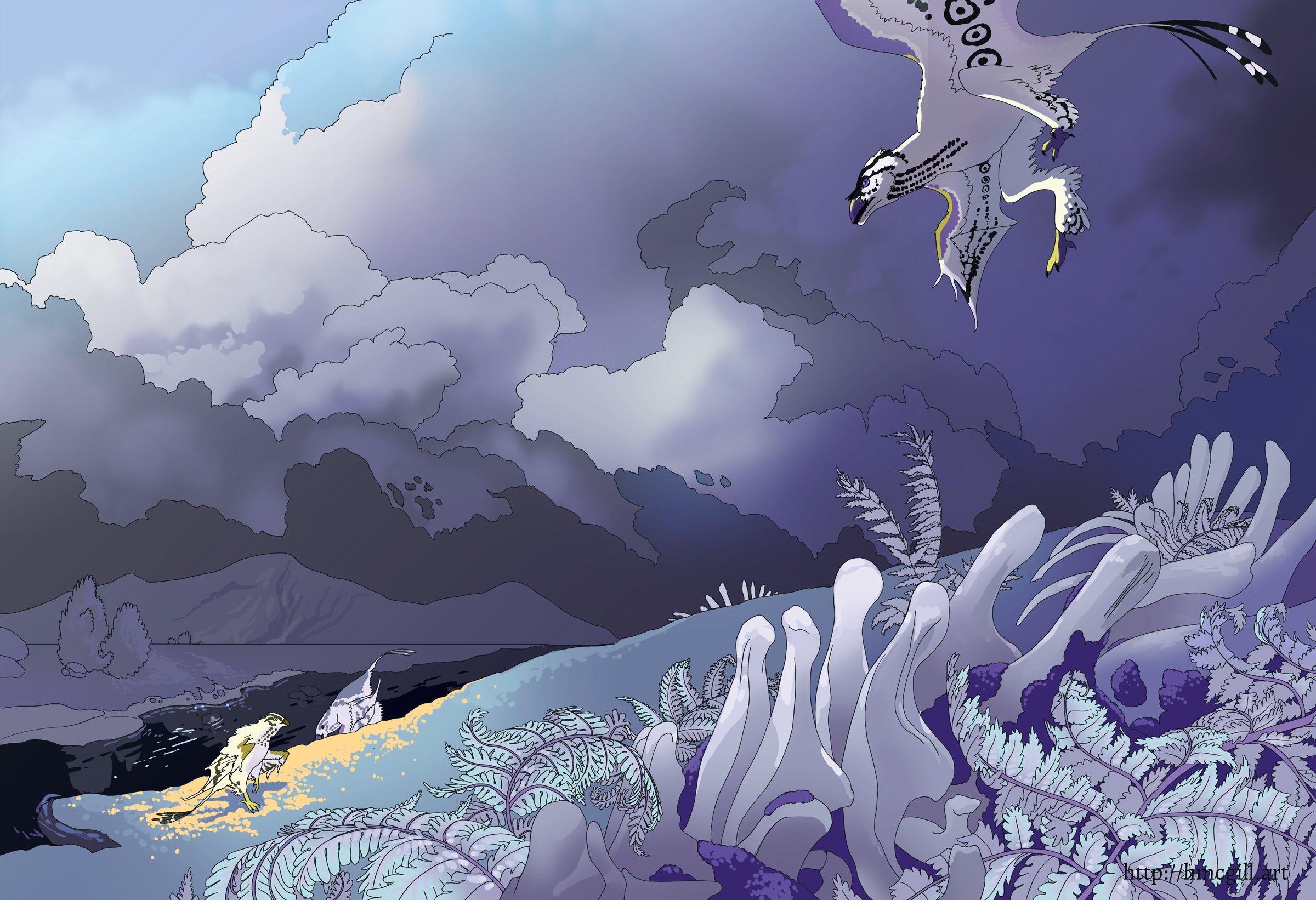 The Composition that Social Media Made

This piece didn’t start out as a reflection of some unrelated personal stuff that happened to me lately. It was defined via a Twitter poll where voters decided I was going to draw yi qi dinosaurs next to a stream and color them purple. I had a lot of help from NeolithicSheep, who shared my polls with enough people to give me good data to work from.

No stream this week, but next week…Let’s use the results of three polls to make one art piece!

The third poll is the most important one so be sure to vote in all three!

Poll 1: Where do we want to set our piece?

Dolling up a poll with emoji to make people want to click it is one thing, but the main force involved with garnering interactions is having friends with big followings on Twitter. I haven’t 100% figured out how to manipulate social media in my favor on my own, but this poll’s results sure turned out fun. I feel encouraged to set up other polls like this in the future. If you check out Shep’s twitter and enjoy his content, you can help him maintain heritage sheep and cattle breeds by pledging to his Patreon.

Color Theory: Lightness and Darkness
When learning how to color, many beginning colorists are surprised to learn that at least one aspect of color theory can be picked up from doing grayscale (monochromatic) studies. The lightness and darkness of a color affects its depth and ability to catch the eye in any given composition. The way that light and dark colors pop out depend on their proximity to one another. Examples: 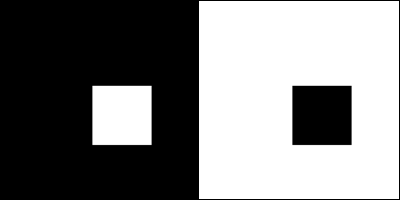 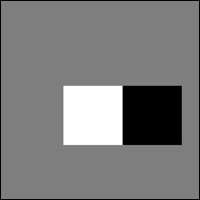 It’s also important to keep midtone values in mind. The typical composition that utilizes midtones will gather  the darkest and lightest colors on a focal point. They will pop out at the viewer as an area they should look at. This is called an area of ‘high contrast’. 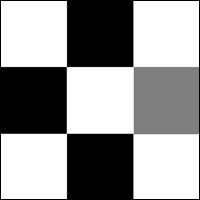 …But this can be subverted in a very interesting way, such as making a high contrast black and white composition with one area of midtones.

Monochromatic doesn’t mean ‘grayscale’, either. Monochromatic simply means ‘one color’. These aspects still apply even when a single color is used throughout a composition. Photoshop has a tool called ‘Gradient mapping’ which is useful for exploring monochromatic compositions and then harmlessly trying out different color schemes on top. It can be pushed to fantastical extremes, depending on the colors chosen, breaking it out of monochrome into a multicolor piece. Some artists use a Photoshop layer set to Overlay to hand-paint monochromatic compositions. I confess that my grasp on grayscale is not quite polished enough for this to work, and when I used this method I would add layers on top to deepen colors. For me, Overlay is too messy for comics coloring. 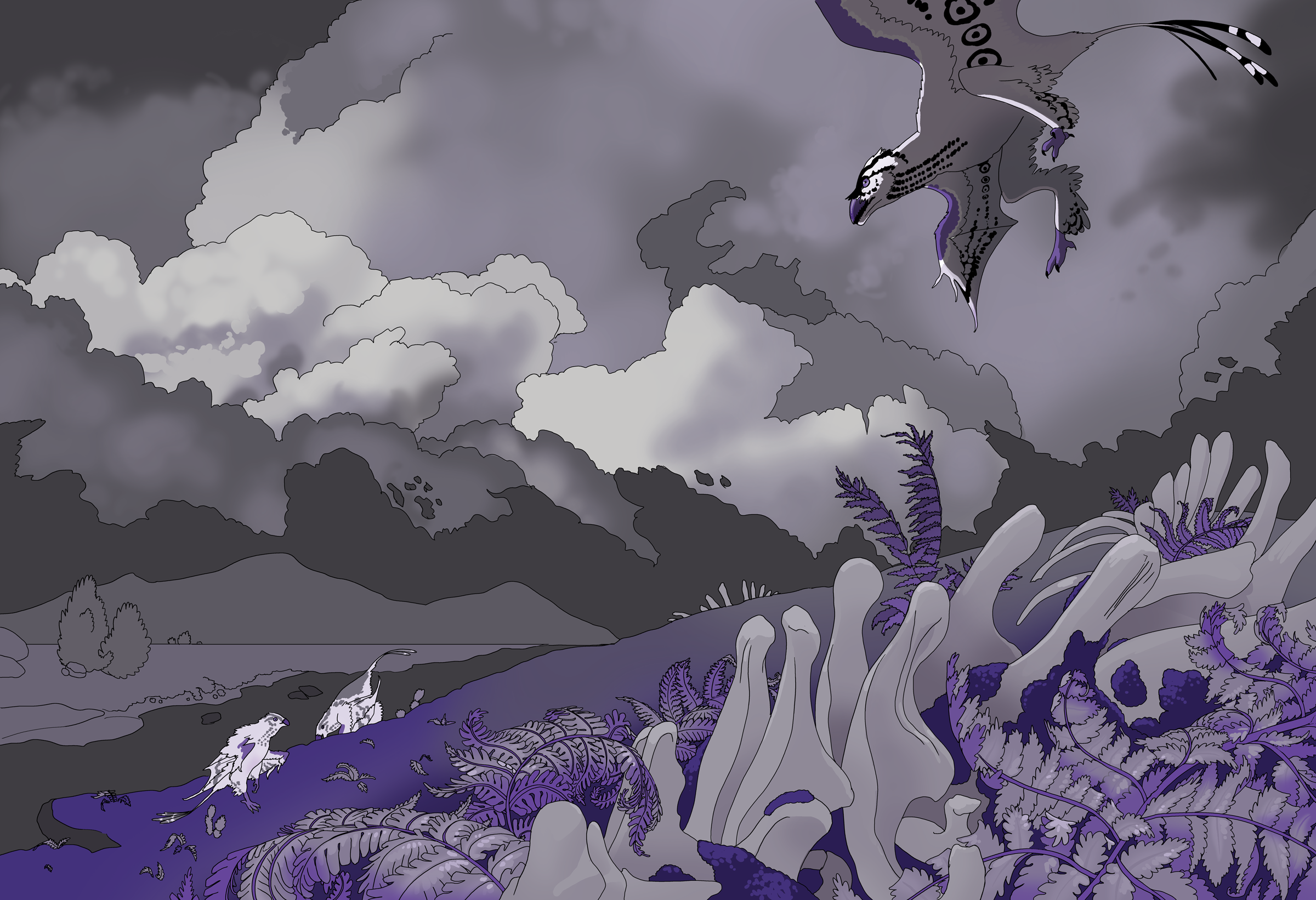 My first attempt at coloring Afterlife was to use only purple, and color pick based on a palette. For a vision of the beyond, it turned out a little too lifeless, so I added a few spot colors here and there. I haven’t figured out whether this is an aspect of purple to be cold and dark like this. Red is probably easier to work with, so I’m keeping red in mind for a future monochromatic composition.

For another note on color theory, here is my writeup on how different hues of colors interact. If you play with both hues and with contrast, you’re bound to get some lovely color composition ideas. 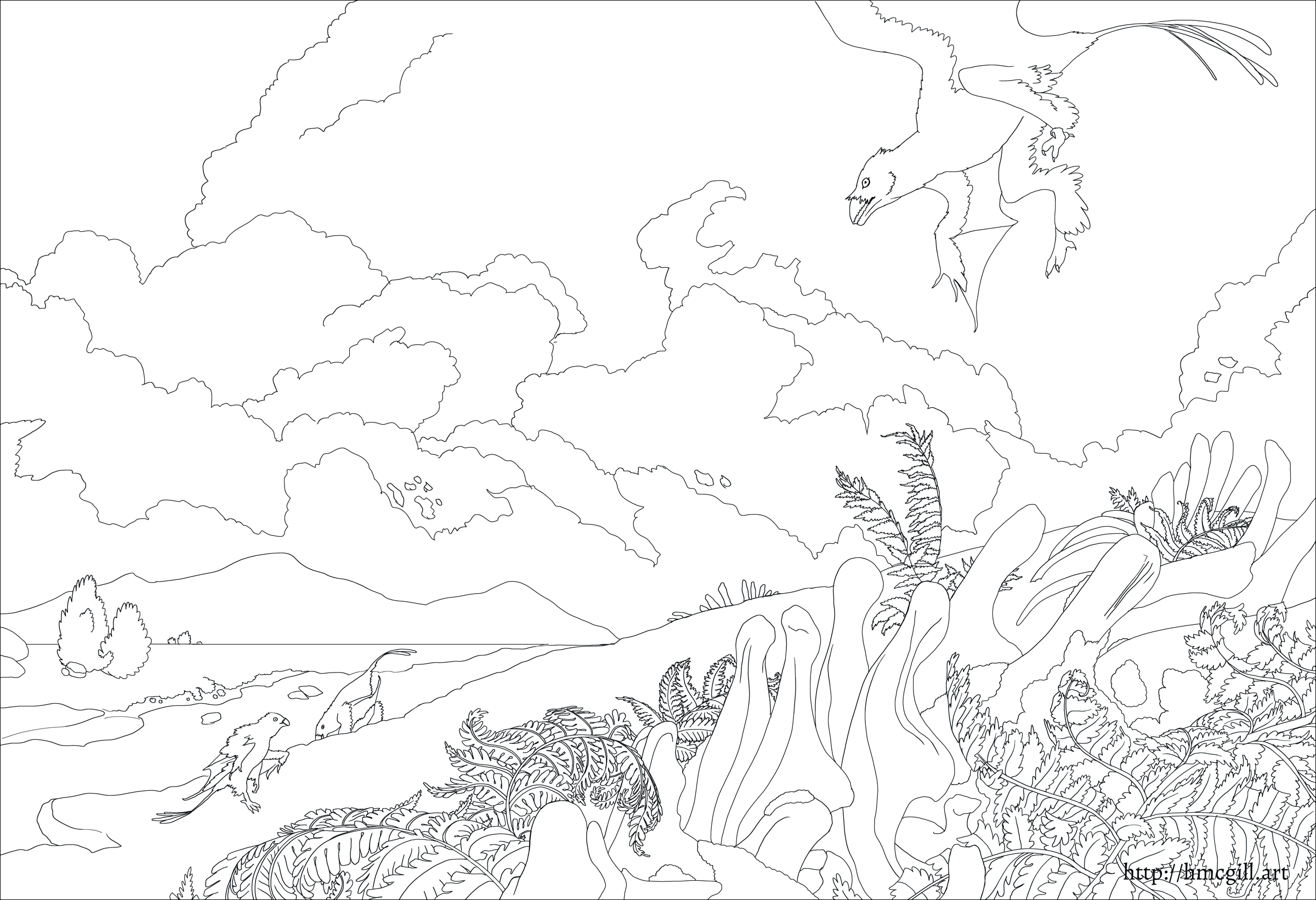 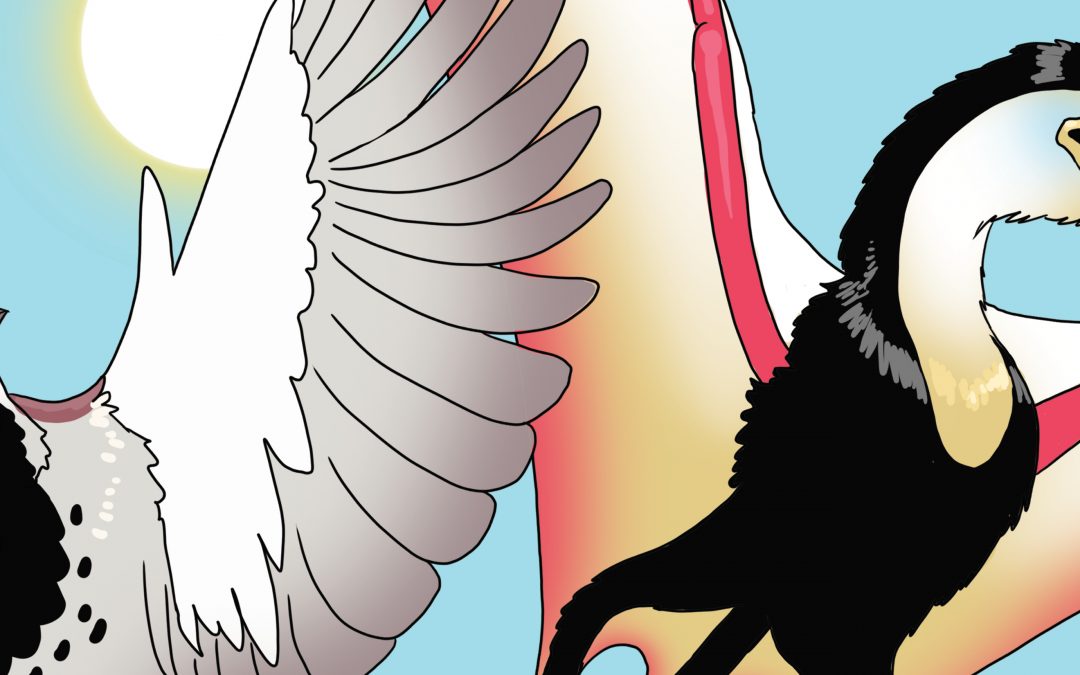 UX Testing on Comics with a Target Audience 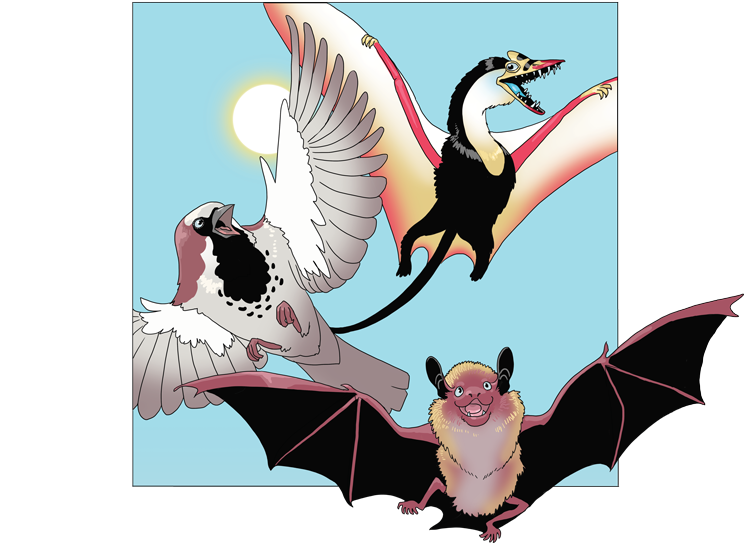 My goal with RAWR! Dinosaur Friends is to create informational fiction that doesn’t feel like a lecture. I want my readers to feel curious about the world. Not only that, I want them to feel equipped to explore that curiosity. In generally I’d really love to make science feel less…enthroned(?) As a static collection of facts. I also find the usual hodgepodge of ‘safe’ dinosaur facts pretty dull. Most conclusive, immutable facts we have about dinosaurs are dates and locations where their remains were found because we can never go back in time to see a living dinosaur. While I understand that a book having dated or disproven evidence is problematic, I have to ask…Where is the wonder? Where is the exploration? Science isn’t lists. Science isn’t facts. Science is an active, interactive pursuit. 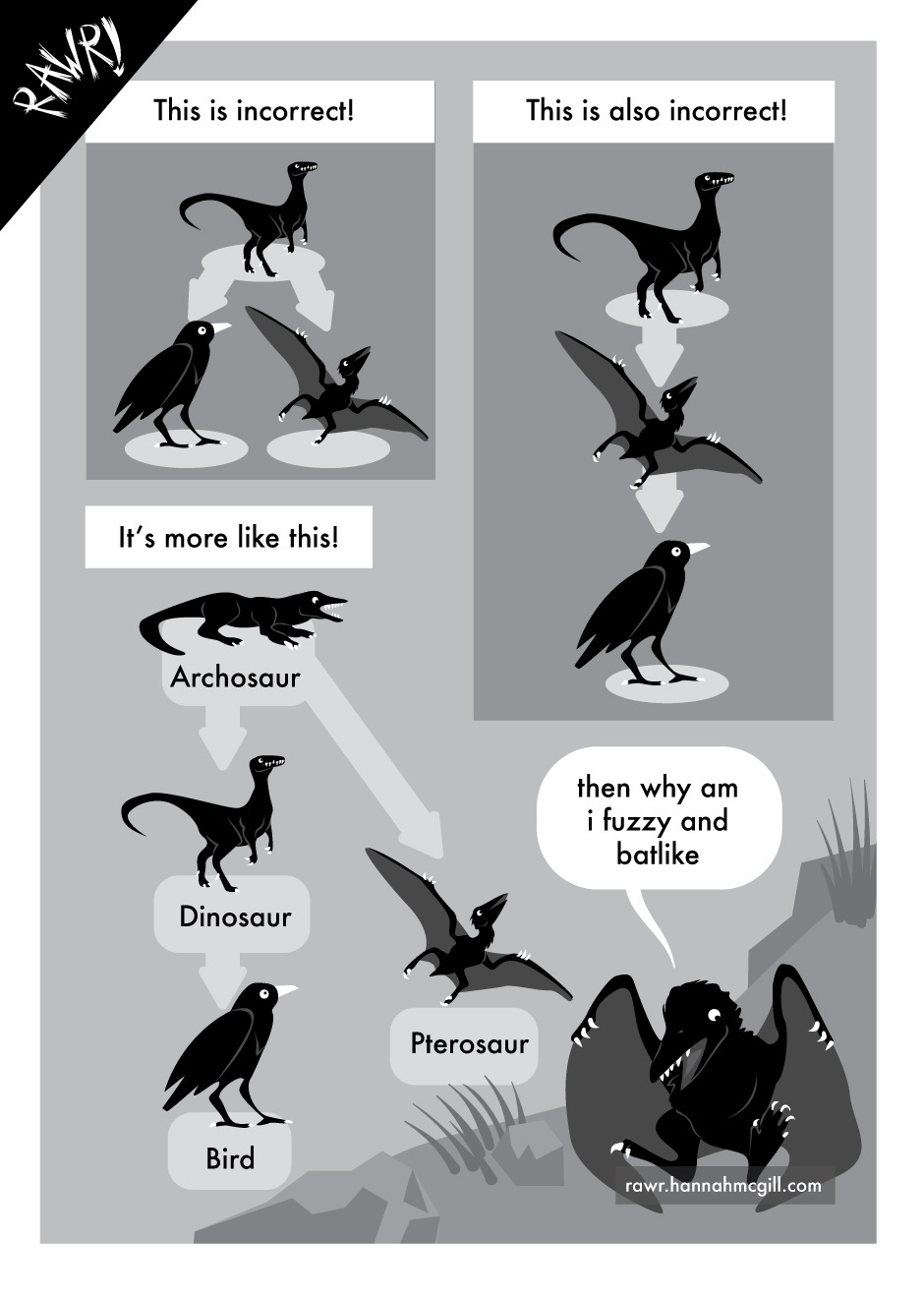 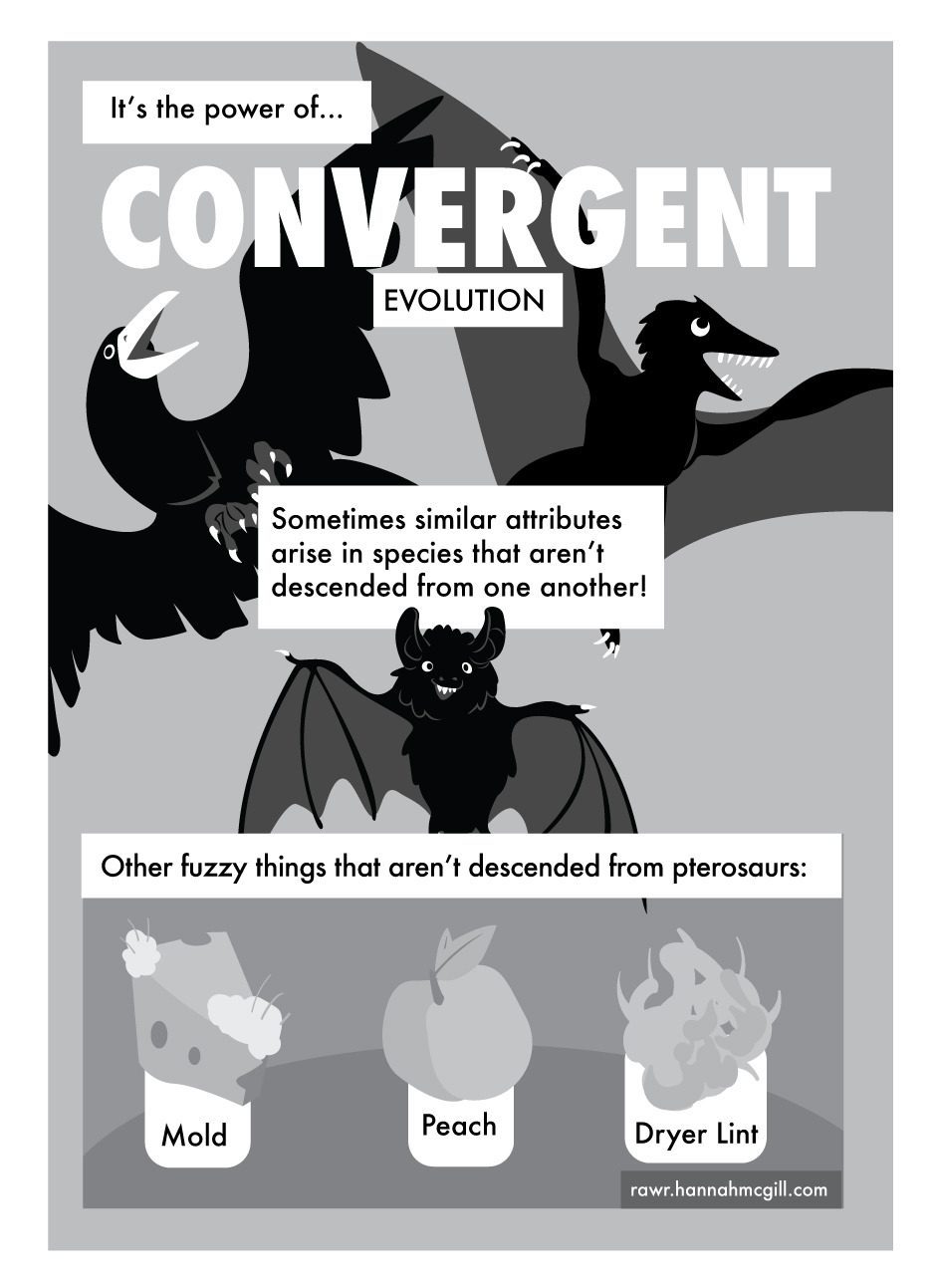 When I first created RAWR! Dinosaur Friends as an armchair natural history blog, this spread on convergent evolution became quite popular. It resonated with over 2000 people. Maybe I could update the art and expand it with some sort of interactive exploration activity? Something with open-ended questions, so kids feel like they’re being engaged in a conversation, and invited to come to their own conclusions? 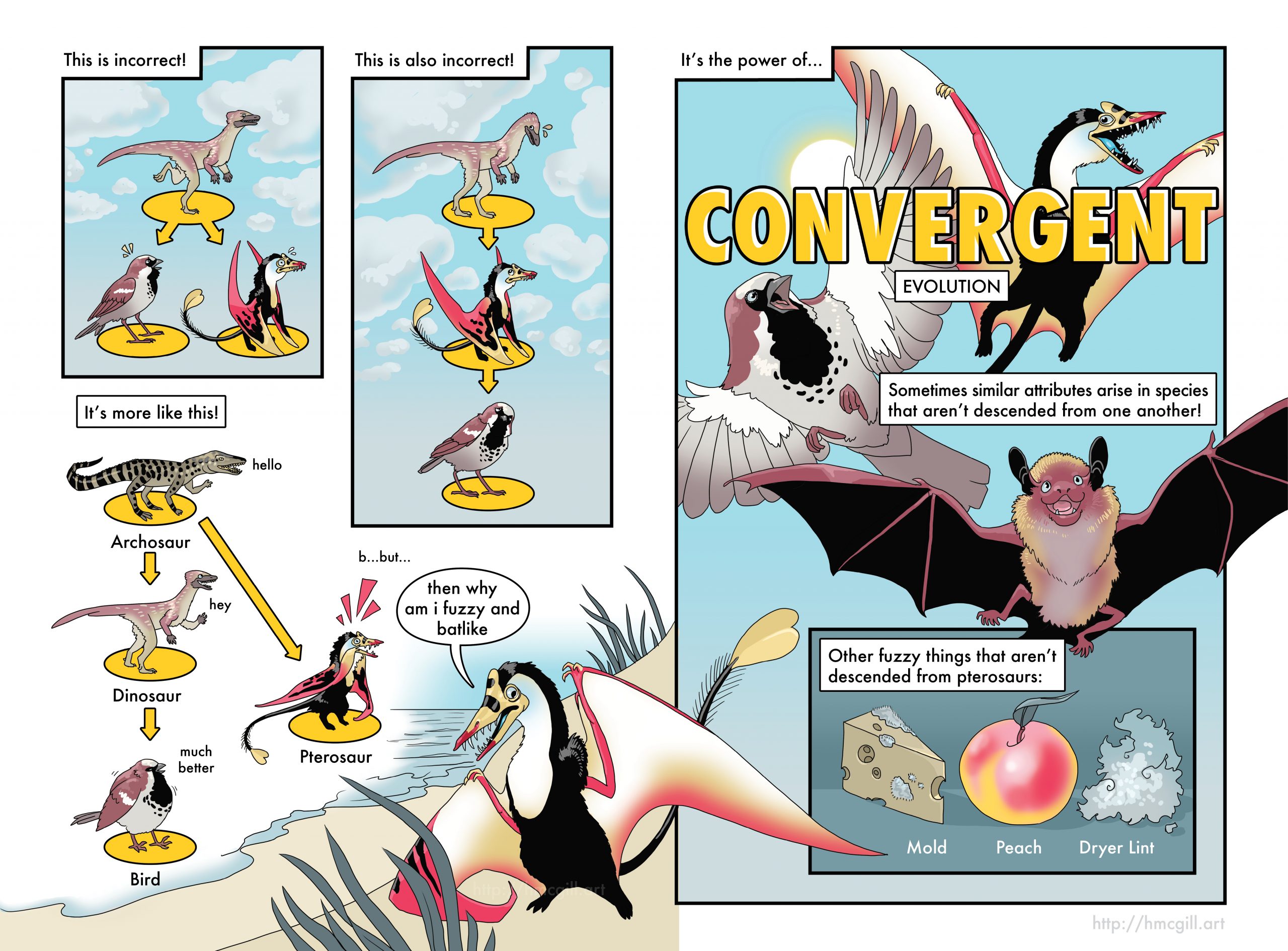 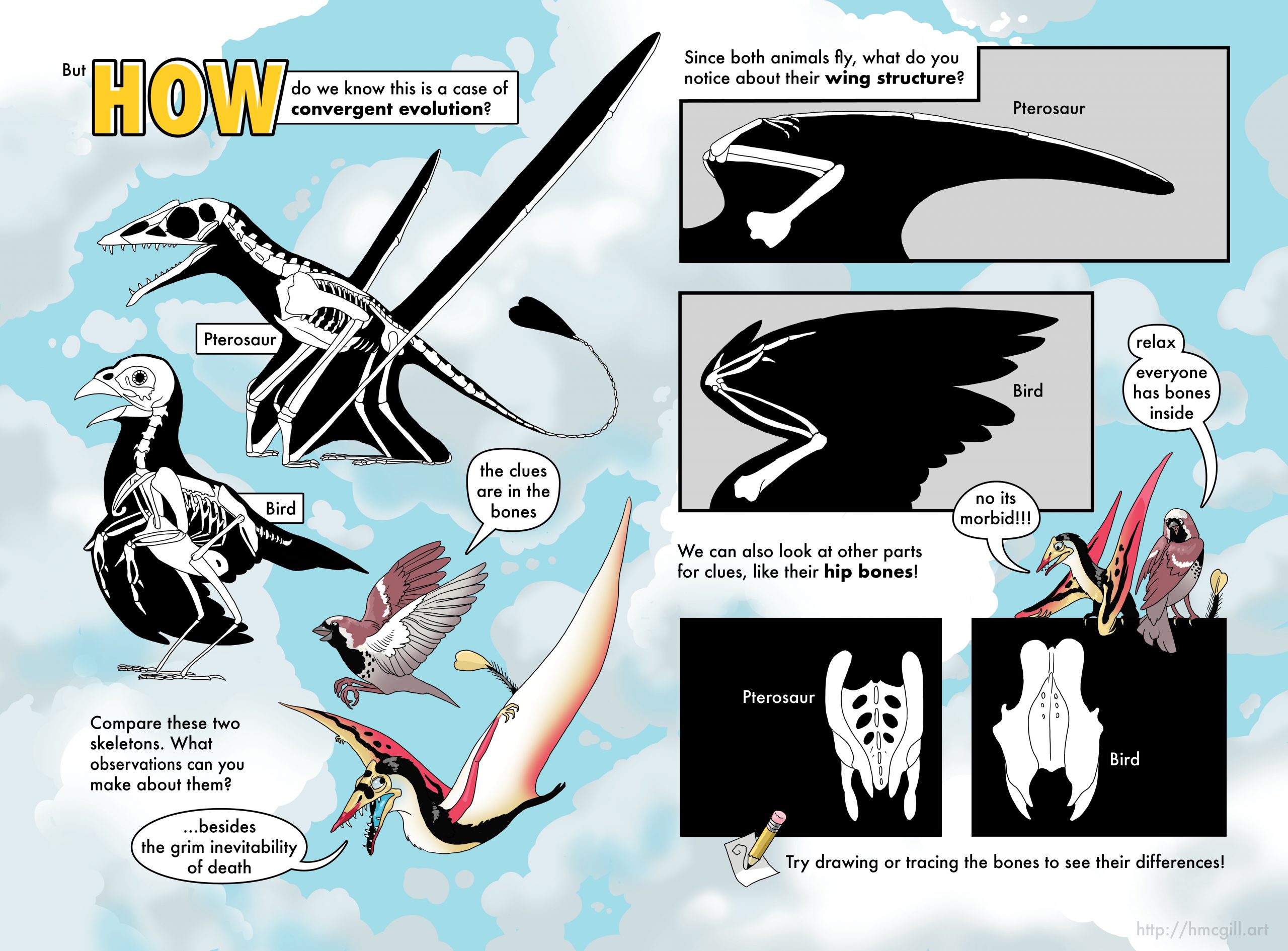 I updated my blog post as a full-color history concept with jokes, followed by a page of diagrams. The readers aren’t expected to form a specific answer by looking at these diagrams. The diagrams are there for comparison and maybe a little drawing practice. If someone from my target audience decided to give that a try, I would consider it a success.

I then showed these pages to my amazing writing group, the Night Writers, and esteemed scicomm author/illustrator Ellie Peterson stepped up to help! Her class of middle-schoolers was more than eager to help by looking at these spreads and writing their (hilariously candid) thoughts all over them. Thank you so much, Ellie! While Ellie’s students weren’t required to draw anything, she did ask them whether they would draw a diagram or not. Many of the responses were really cool. These kids are perceptive!

This was a really exciting and validating response! That’s all I really want readers to do, is to compare images for themselves, because scientists deal with exploring observations all the time. 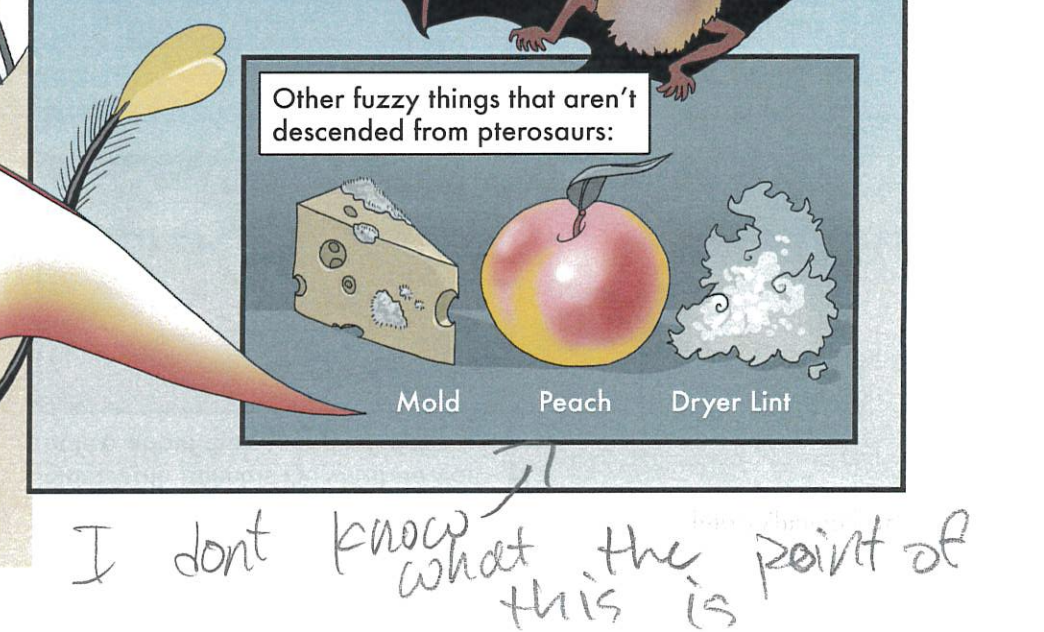 No UX test (or comics creation process) is complete without at least one existential crisis. Maybe this kid was having a bad day…But, they had great notes on the other page’s bone diagrams so at least they were interested in the subject matter. Either way, it’s best for me to stay humble.

Total of 6th graders who indicated they would draw the skeletons: 3
Total of 6th graders who indicated they would not draw the skeletons: 2
Maybes on drawing the skeletons: 2
No answer on whether they would draw a skeleton or not: 5
Conclusion: When guided to these pages in an educational environment and given two options, 6th graders sometimes consider drawing dinosaur bones. Even when the 6th grader in question decided they wouldn’t draw the bones, they still wrote their observations of the bones on the page. That means readers are observing the differences in bones, which is the big thing I want readers to do with this book concept. The drawing suggestion is an extra activity for kids who really like comparing pterosaur wings to bird wings.

Grammatical corrections to dino chatspeak by 6th graders: 5
Conclusion: Pterosaurs and birds might brush up on their grammar!

What changes would I make in response to this data?
At the moment, I don’t know how I would edit my comic, because a lot of the ‘confusing layout’ notes would be solved with book binding firmly separating the pages. The speech bubbles on page two in the first spread are under review as something I should edit. The data pool was small and the comic is only a four-page sample, so I’ll try not to overcorrect. I am also going to have to revamp my original idea of making all the organisms talk in chatspeak, per a meeting with an editor who indicated I may have to rethink it and instead give them a silly typeface.

I was glad that many kids trusted their teacher enough to admit that they wouldn’t draw the diagrams because that indicated an environment where they could be honest. In general I trusted the answers they wrote. I’d have loved to see at least one attempt at drawing the diagrams, but the pages didn’t have any room for that (It’s meant to be an activity that takes place on a reader’s own paper outside of the book, anyway). If I work with an educator again, I may ask for drawing paper to be provided to see if kids actually want to draw bones or not. Sometimes a kid says ‘sure, yeah let’s do this’ but when it comes down to actually drawing they might hesitate.

My big takeaway from the UX test was that kids would, at least, interact with science in a comic format when given the environment and the materials. I can use that knowledge to help sell the concept overall of ‘interactive science’. 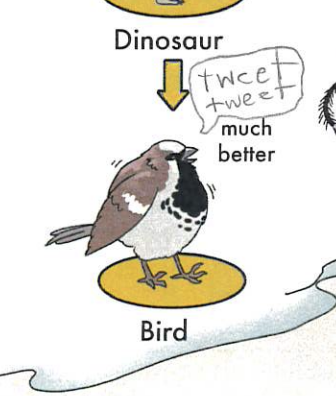 Also, this was the best feedback.

Understanding a comic’s target audience is key to pitching it to an agent or even a publisher. Maybe a comics creator has an idea of who their readers should be, but isn’t quite sure. It’s hard to say what middle schoolers think is cool without querying the source. All sorts of things could have changed between the time someone is twelve years old and creating publishable comics.

My career as a UX/UI professional was short and depressing, but here are some of the things I learned that are helpful for parsing critical feedback.

Ellie was really helpful to me when she offered to bring my work to her class because she became a neutral presenter for my work. The kids didn’t have to worry about offending or impressing me when they interacted with the comics pages. I also imagine that as their cool biology teacher, the kids involved trusted her and that also allowed them to give lots of feedback freely. As a result I have some nice talking points for when I pitch RAWR! Dinosaur Friends as a middle-grade graphic novel for publishers to pick up. I wouldn’t have had this knowledge about my specific project without her help. 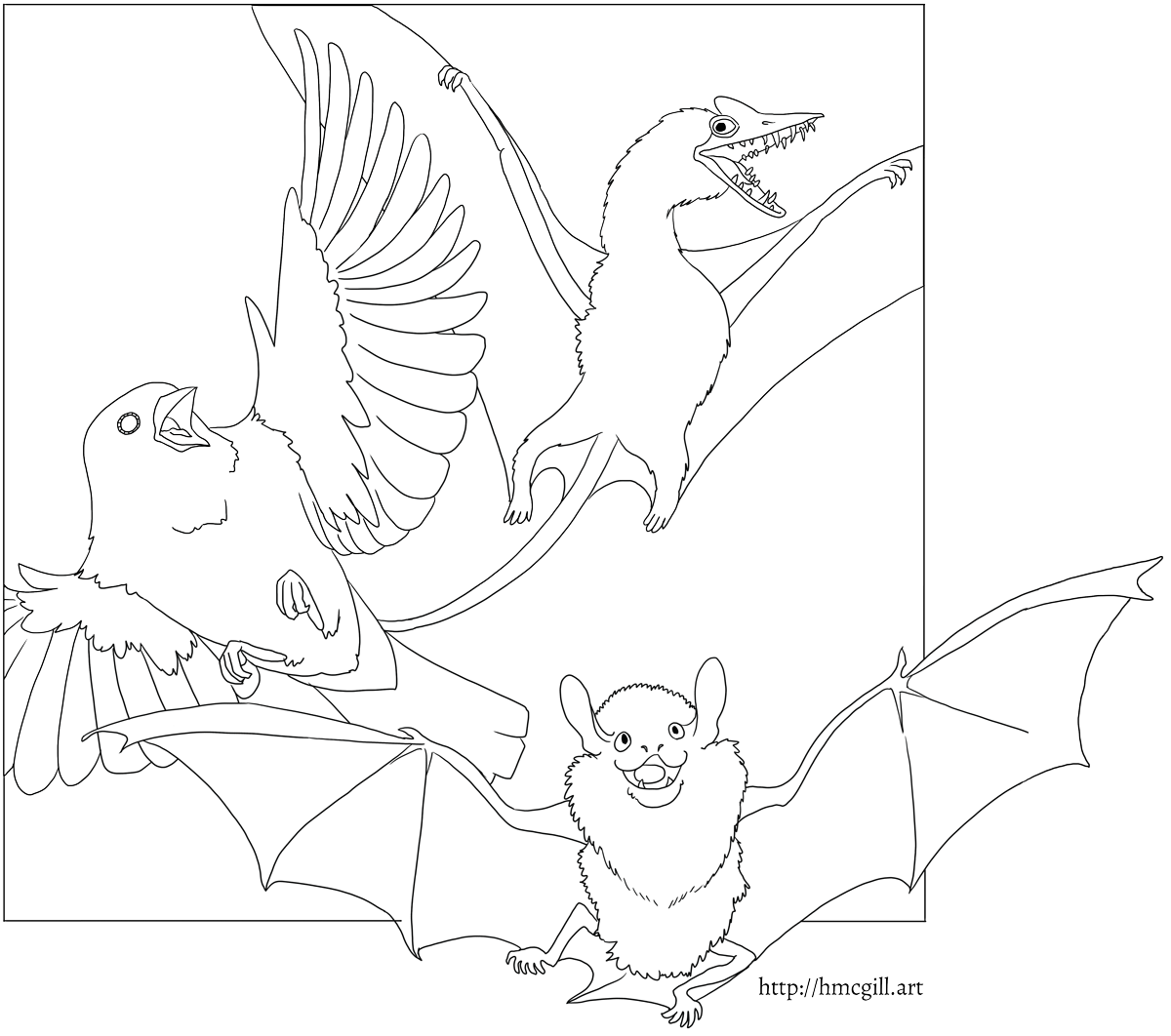 If you want to be part of my next UX study, print this out, color it, post it somewhere, and tag me to come look at it. It’s licensed under CC-BY-NC 3.0.