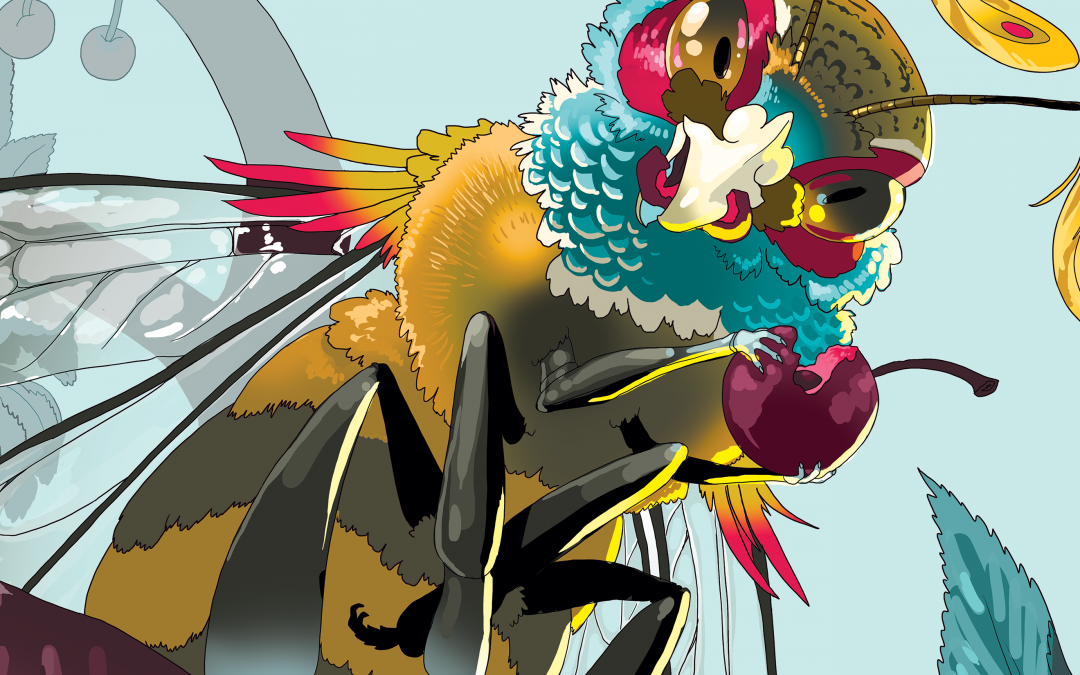 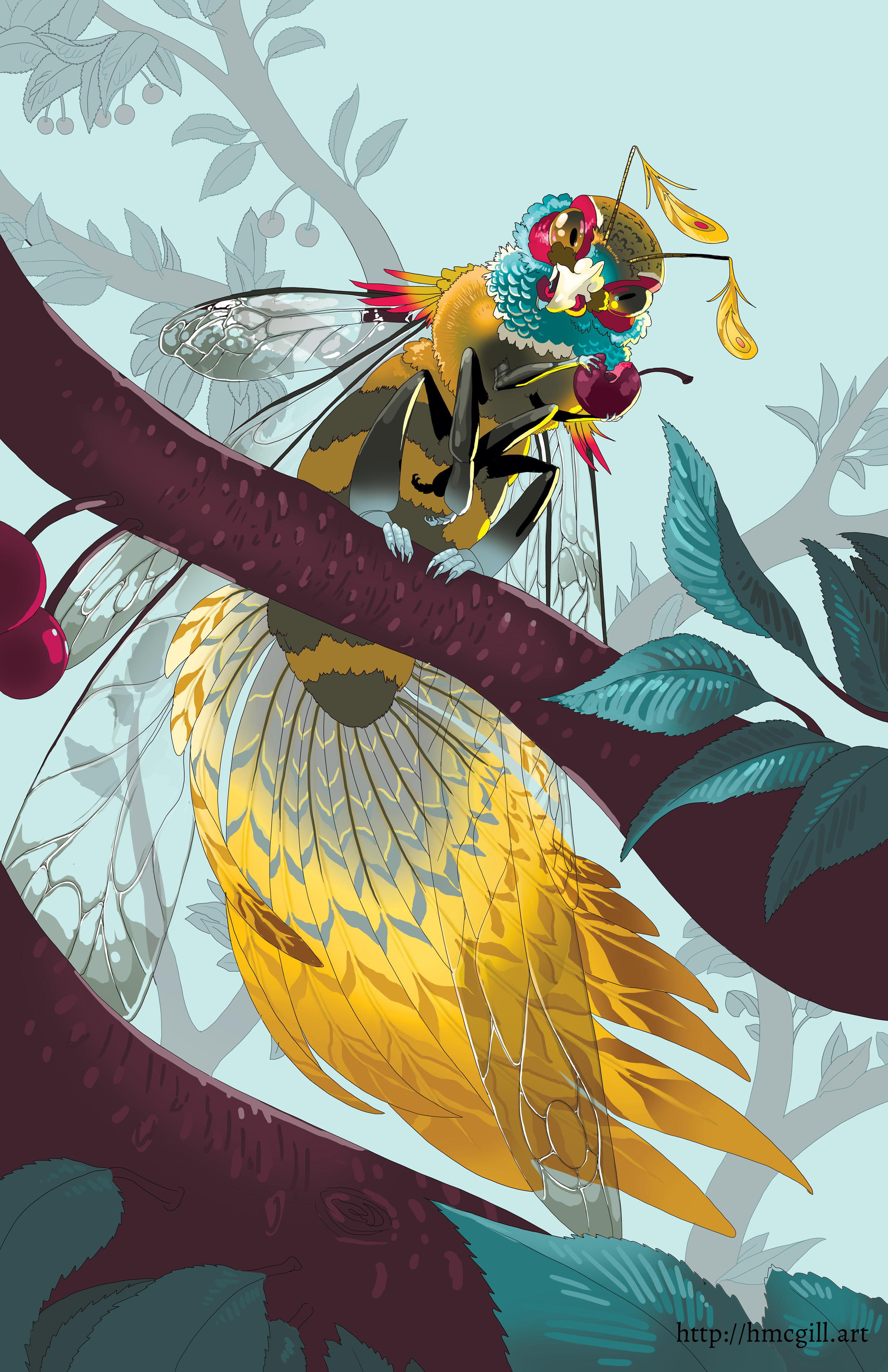 The Creation of a Free Home-Brew Dungeons and Dragons Monster
When I first approached Adam Ma about designing mechanics for the Beenix Dungeons and Dragons (DnD) monster, I had artwork and a jumbled text document full of features that blended phoenixes and bees. It was ‘lore’ in the worst sense — me blathering about exploding bee trees and cherry honey, having all of one or two experiences as a DnD player and understanding that ‘numbers good’. Overall I did not have a concept of how the Beenix would fit into a tabletop rpg campaign. I passed a link to Adam and was unsure if I should take him up on his offer of collaboration since the beenix was such a mess! I’d honestly been intending to partake of his professional Dungeon Master (DM) services. The moment Adam heard that it was a homebrew monster design to be released freely to the masses, like Oprah would, he grabbed all my Beenix fragments and ran off with them.

When Adam returned, he had a gorgeous pdf containing everything a DM needs to incorporate the Beenix into a DnD campaign. My intent was a creature that is suitable for low-level adventurers to encounter, but could scale up to a mid-level encounter. Not necessarily a hostile entity, but alien and requiring some patience when encountered. Adam translated my ideas into DnD concepts such as ‘swarming’ for multiple monsters. He gave the Beenix better DnD-specific context by ascribing them to an existing setting: the Faewilds. Adam also pushed the concept of the Beenix queen into not just an entity, but as a whole setting unto herself. 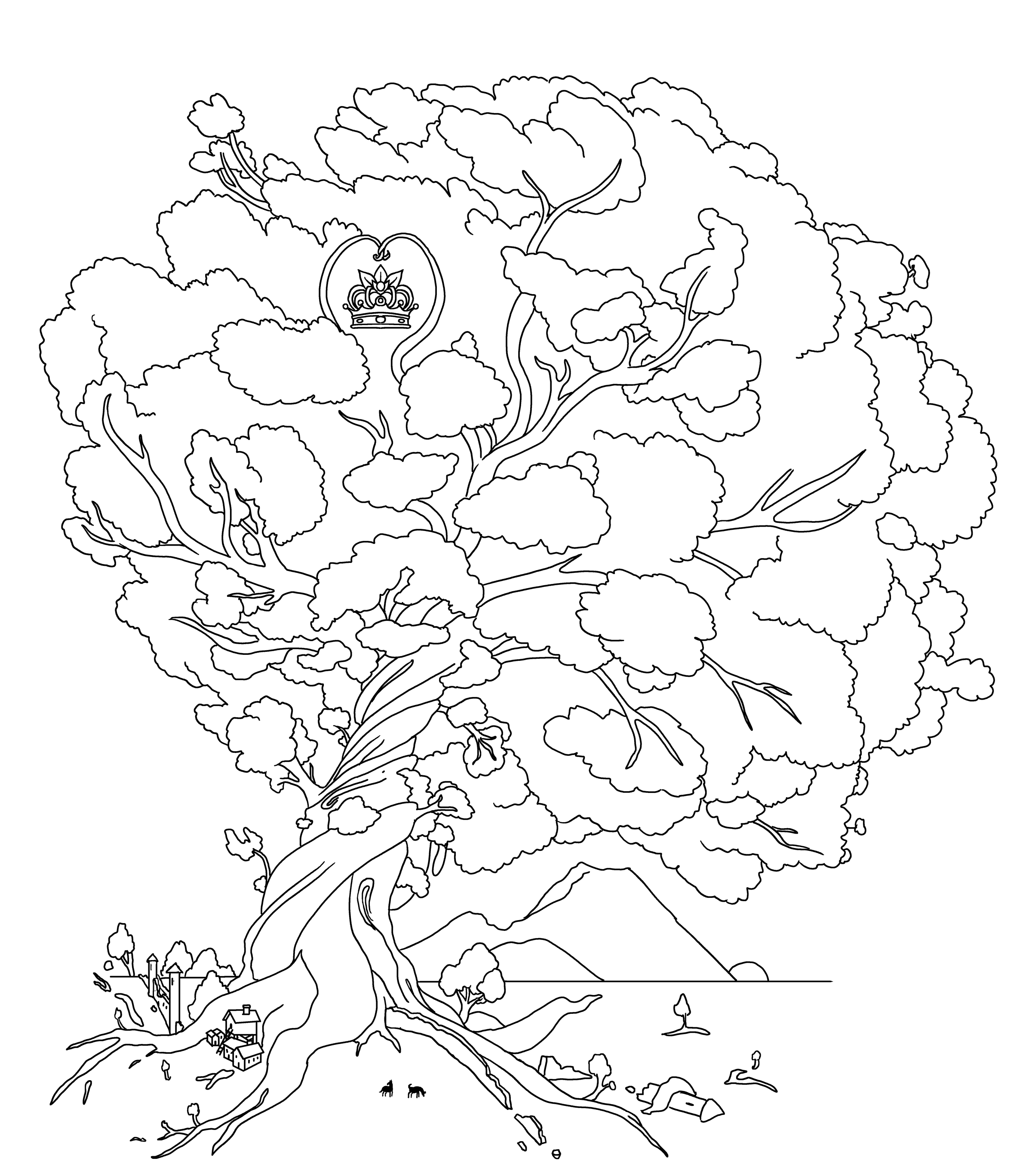 Adam ran the design through some balancing checks and now here it is, a free, cute, weird addition to any Faewild adventure that could use a little more glitter. I highly recommend developing adventures with Adam Ma. I had so much fun and I’m grateful he took my concept and ran this hard with it!

The PDF contains stats, lore, and artwork for the Beenix, and is licensed for non-profit DnD campaigns under CC-BY-NC 3.0.

How to Digitally Color Diaphanous Insect Wings
Whether it’s a bee or a dragonfly, or a house fly, insect wings can be tricky to figure out because they are shiny, delicate, and transparent, all at the same time. To begin, we should look at a reference photo, courtesy of Pixabay. 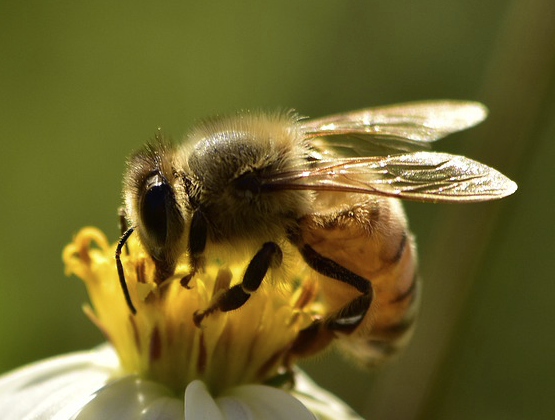 What we learn from this photo is that an insect wing has opaque parts with shiny transparent stuff in between those parts. How do we mimic this in a digital drawing? We’ll use masking and some hand-painting to nail the delicate insect wing look. 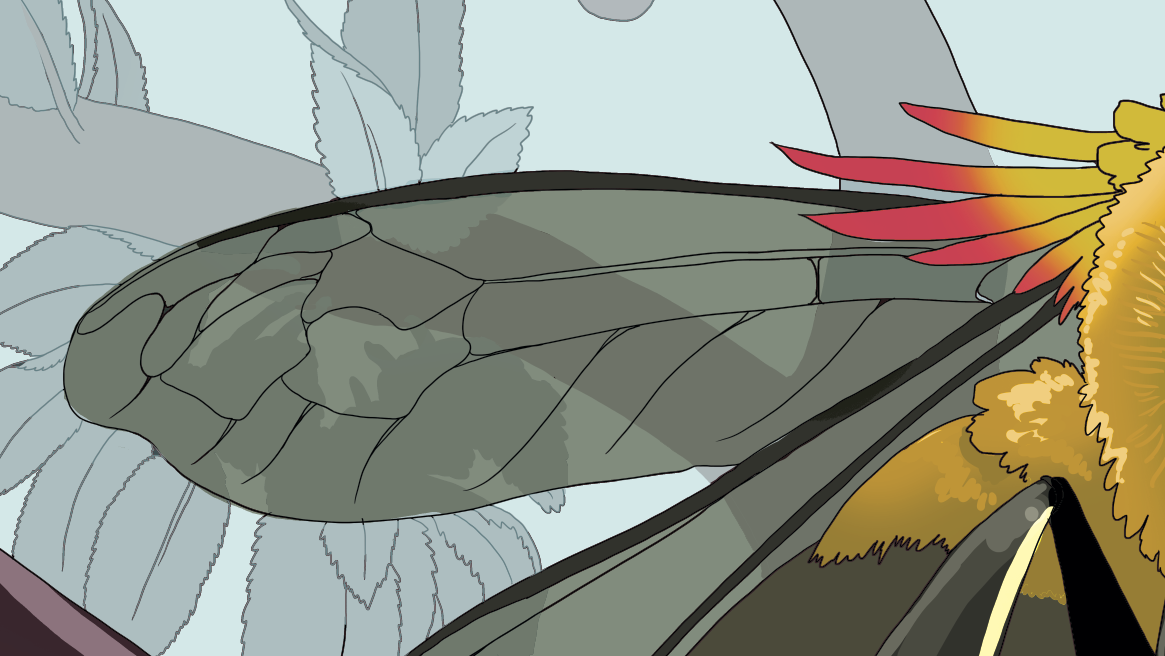 The opaque veins of the wing are filled with 100% opacity dark brown. A bee’s wing has an underlying dark sheen on the transparent cells. I’ve chosen to fill the cells with a dark brown set to 50% Multiply. This is still too dark and opaque, but it’s a good starting point.

I set up a masking layer on the membrane which I’ve filled. A quick swipe with a soft brush set to black on the masking layer makes this look more like the light is passing through the wing in a more interesting way. I use a hard brush to define some sharp mid-tone highlights in the end of the wing. 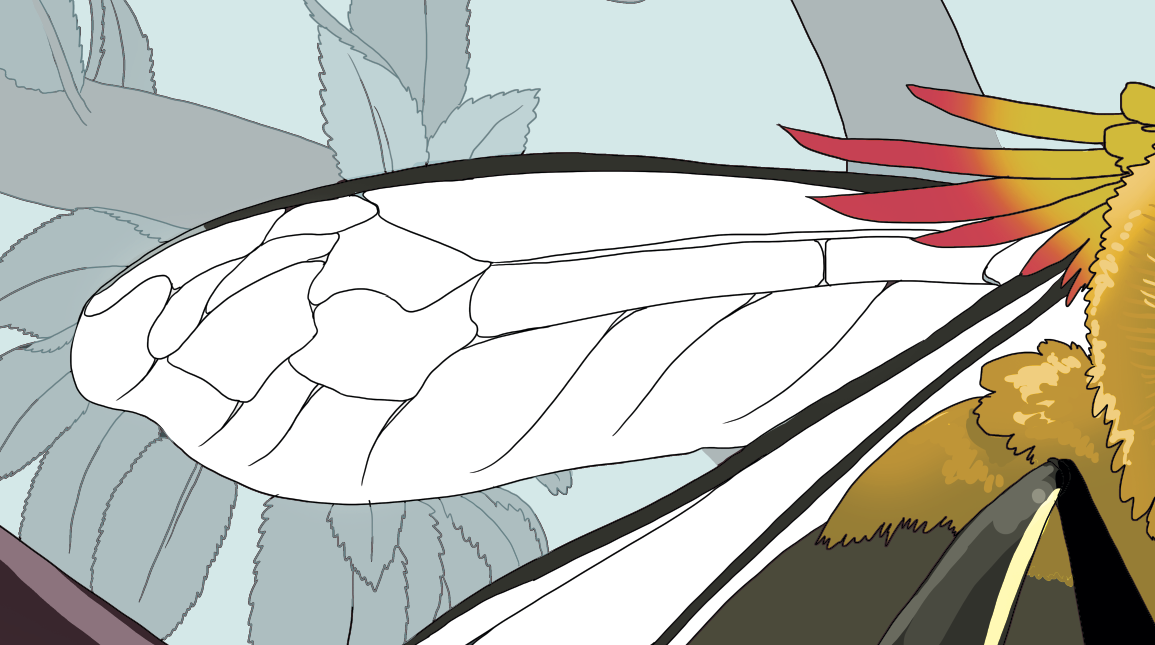 I set up another layer on top of my brown layer, this time filled with 100% opacity white on normal. It will look like the white has obliterated the underlying brown layer, but that layer is intact underneath.

A masking layer and some swipes with a 100% opacity black soft brush, then a 50% gray soft brush first soften the look into a gradient…and then I can pick out brighter mid-tone highlights with a sharp brush. For a final touch, I speckle the edge of the wing with sharp 100% pure white highlights, but only on the wing I really want to shine and shimmer. 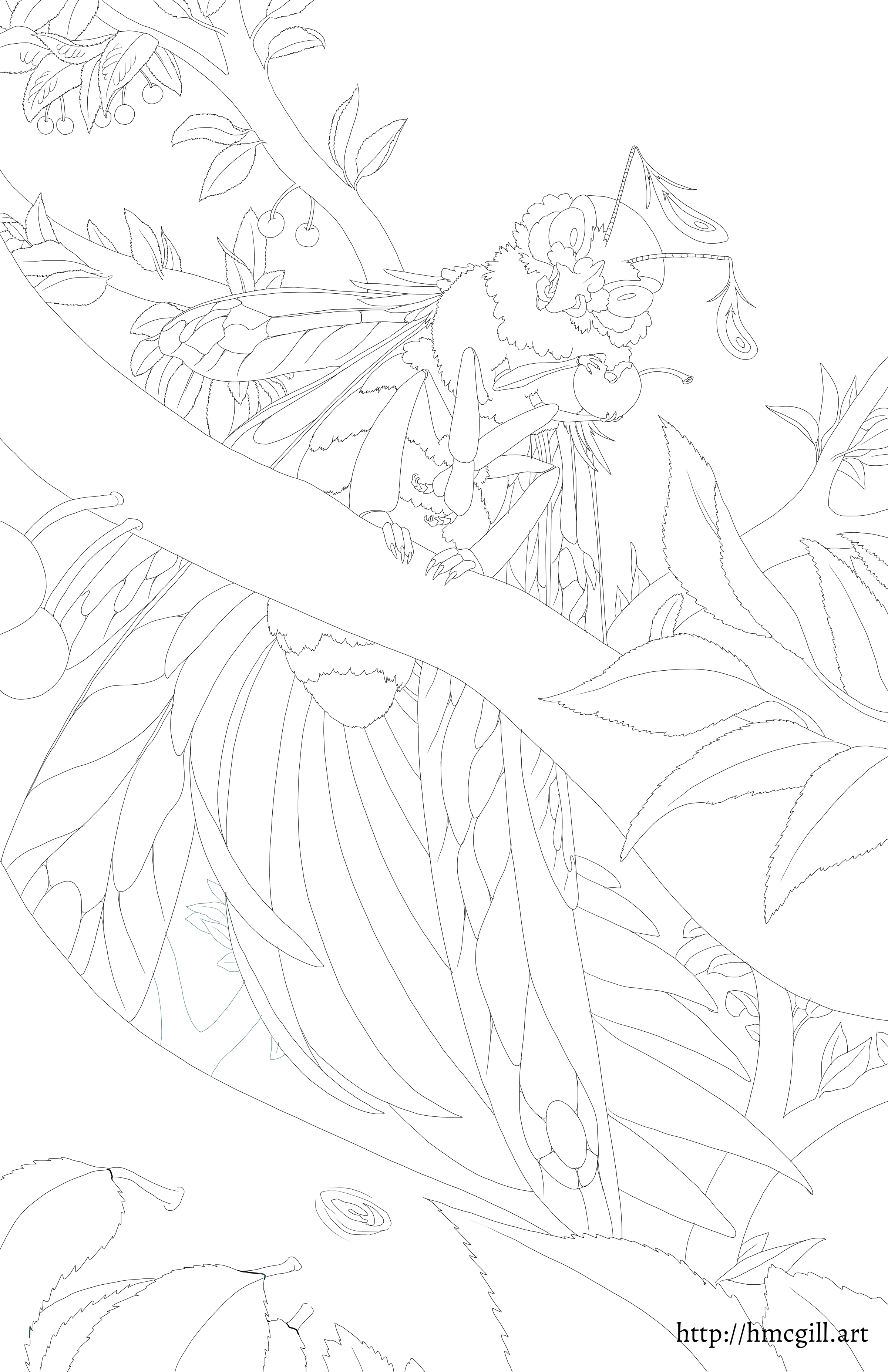 Want to customize your Beenix? Here’s a CC-BY-NC 3.0 coloring page that is free to use for personal, non-profit DnD campaigns, as well as just relaxing with a half-bee, half-phoenix monstrosity.