What is a Tangent?
In visual art terms, a tangent is any area in a drawing where elements of the composition are interacting in a confusing or illusion-destroying manner. Cartoonists who use linework are particularly suspect to tangents, although tangents plague everyone who creates visual art. Tangents, and the avoidance of tangents, are one of the most difficult concepts to learn as a visual artist…A person only knows them when they see them, and they’re specific to the piece at hand, so what a tangent really is depends on context. Clearing up tangents is one of the steps used to make a piece simple and clear, easy to comprehend. Here is one example of a tangent that has to do with clipping a character in a composition:

Typically, only certain parts of the body can be cropped without creating a confusing tangent. The example here shows how cropping just below the shoulders and in the middle of the arm retain the clarity of the pose. However, doing something like cropping the fingers causes ambiguity — Is the hand going into something offscreen? How is the character gesturing? I also like to portray the body-chopping aspect of tangents because this one is not only visual but also heavily context-driven!

As communicators, and providers of commercial art, visual artists are beholden to avoid tangents. Once eyes are trained to look for them, tangents are everywhere! Visual artists develop habits and styles to avoid them. For the most part, the reader benefits. Business as usual, eliminate tangents, increase legibility. Exercise control over the piece, the message. 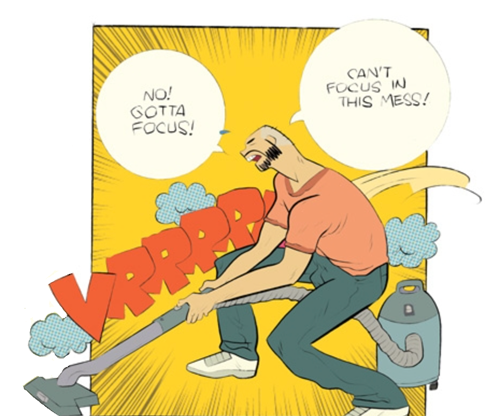 And I start wondering, am I being too deliberate with my work? Is my style causing me exquisitely angsty artistical suffering, instead of allowing me to be productive? With a sigh, I sent Tom Hart more of my money, and signed up to meet Derek Ballard, who not only has a graphic novel called CHOREOGRAPH, but whose credits include storyboards/writing on Adventure Time, Midnight Gospel, and an upcoming animated series on Netflix.

Derek comes from a strong comics background that was the gateway to his career in animation. His work was spotted at a comics gallery which led to an art test with Pendleton Ward’s Adventure Time team. For our first exercise as a small group, Derek gave us big chunky sound effects and speech bubbles on a grid of panels. We were tasked with inventing a story (characters, setting, dialogue) that incorporated the speech bubbles and sound effects in their original spaces. 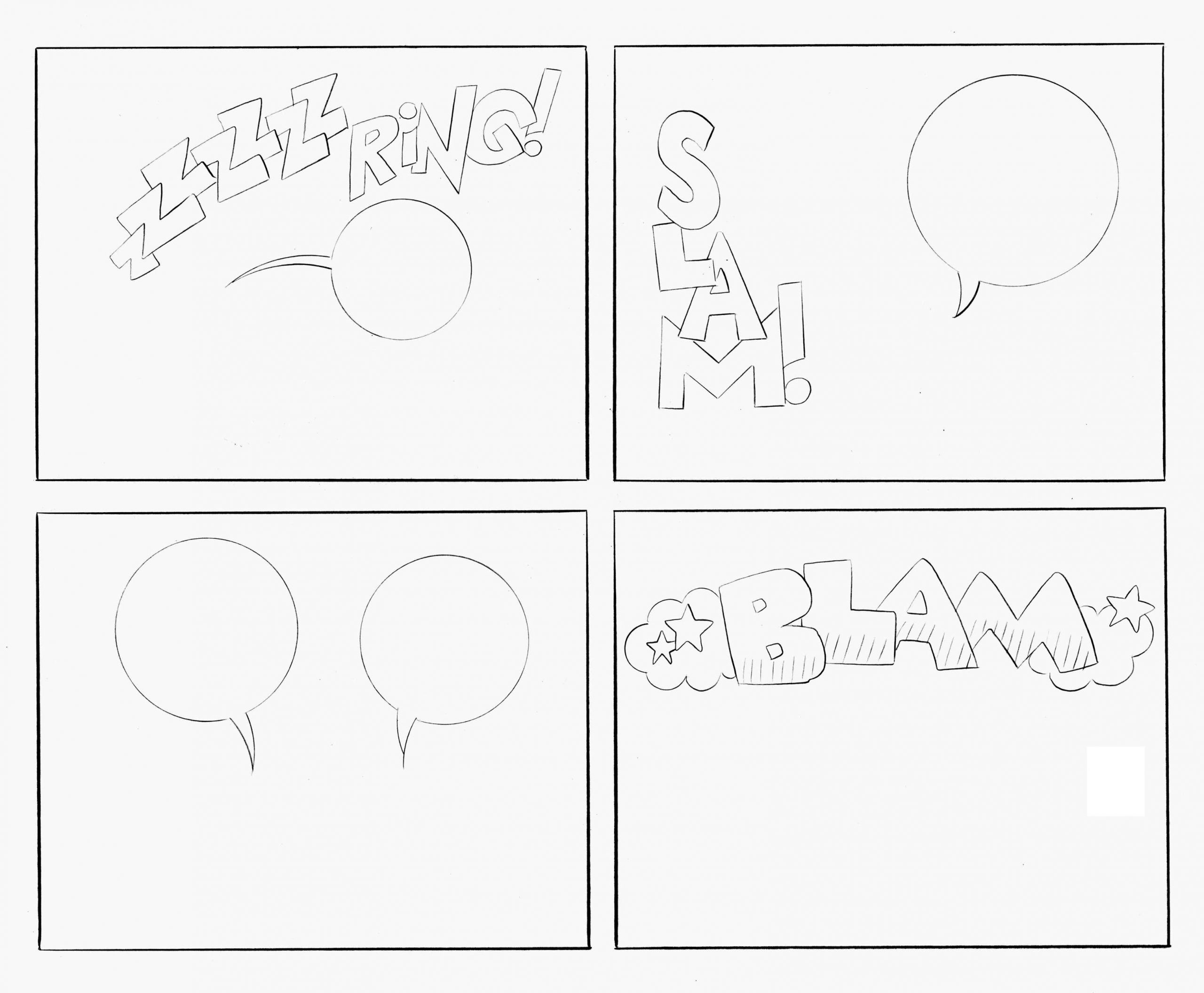 Here was what I filled in from the time I had to draw stuff during the zoom call: 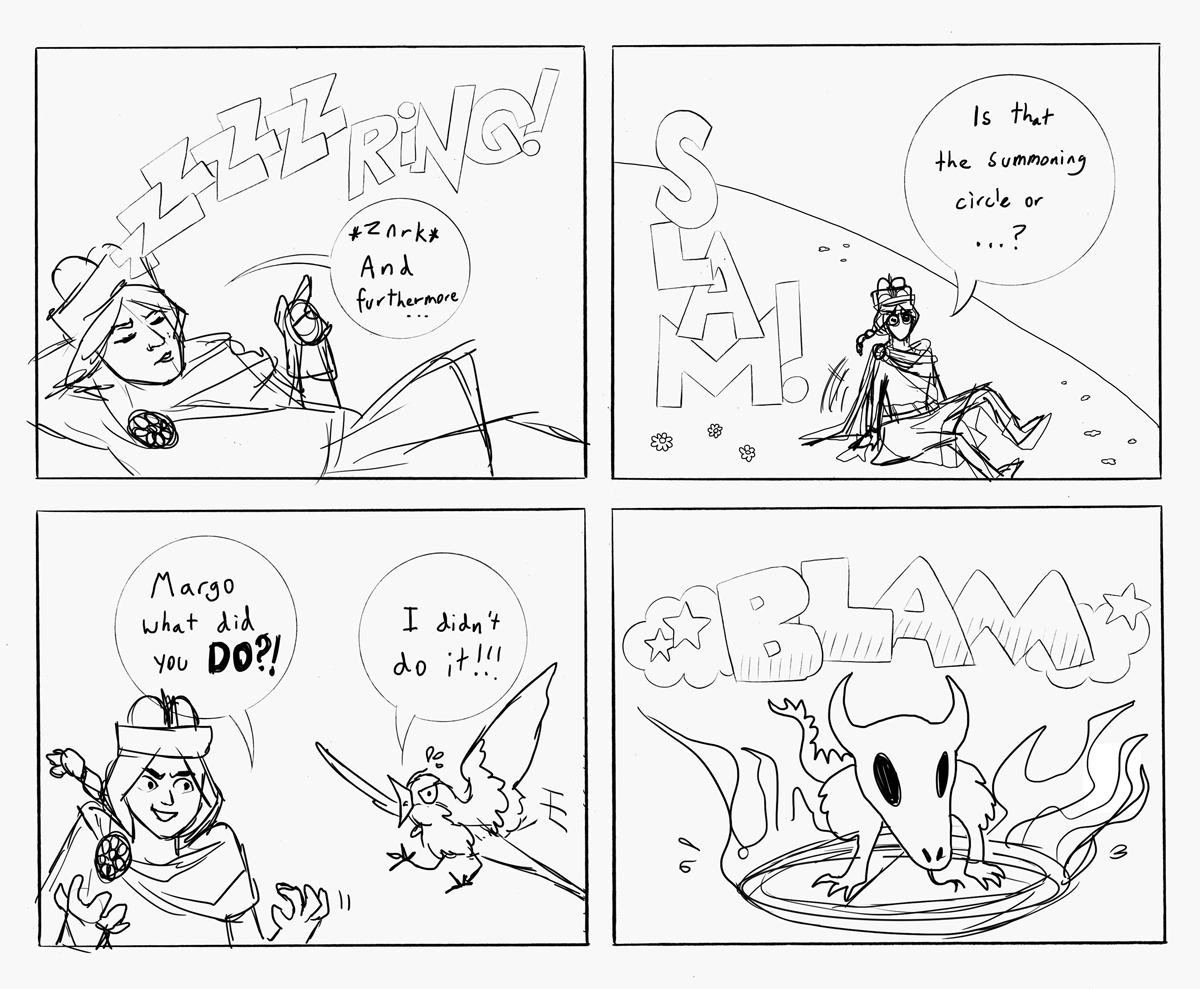 The whole time, I was thinking about, not only the ideas of using limited repetitive graphical elements (such as daisies in a field) to imply setting beyond the panel without drawing every last detail, but also this piece of art again:

I couldn’t get over how carefree the rendering was, and how much space it implied beyond the panel as a result. So, this resulted in Pierre getting his heel messily chopped by the border of the panel. Comparing the tangent that this created to something that I’d normally consider more ‘professional’ and the difference is really interesting to me! I’ve also blocked in the white space that the field creates as a result of how I crop the character sitting there. 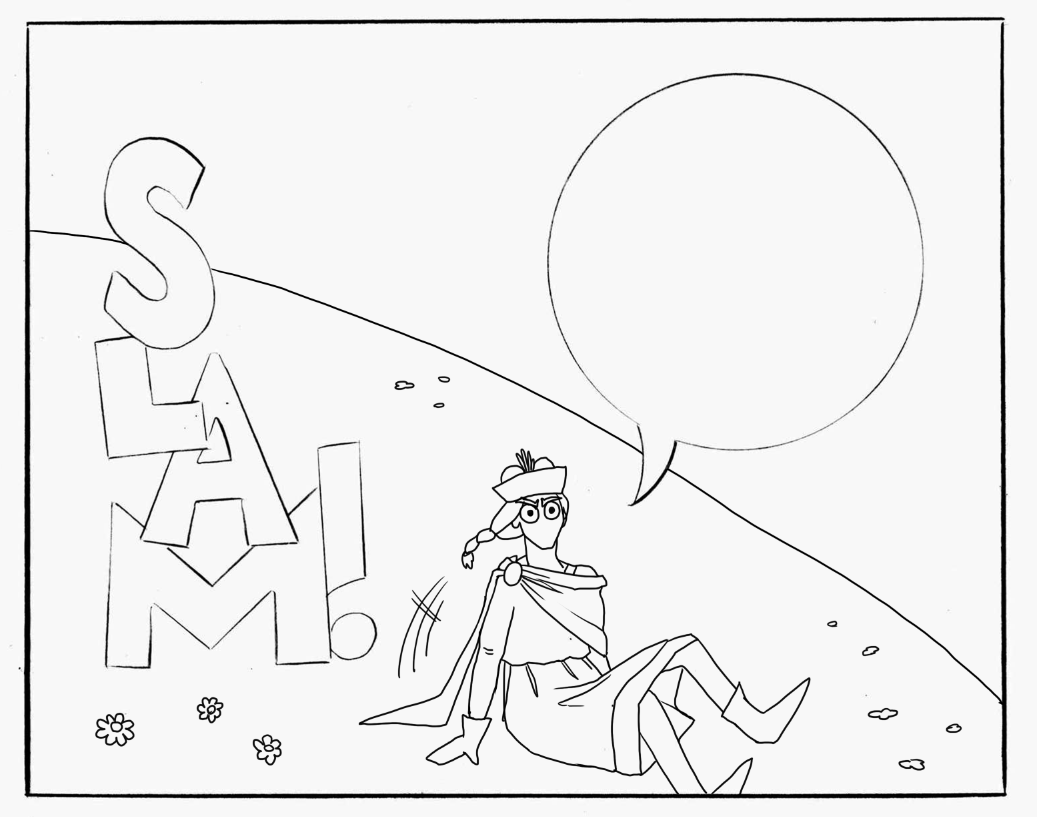 Would the post-Iliad adventures of Achilles gone differently if he’d simply had his weak spot cropped out of the panel? Guess I’ll write fanfiction.

The next thing we did was to generate contextless comic panels that still seemed like they were part of one story, as fast as possible, really loose and fun. I focused on making panels ‘weird’ with Canicula and doing more odd crops. Then we were instructed to draw a story that made sense with our random, contextless panels. Absolutely everyone who did this assignment had a different take on it. I’m going to assume the open-endedness was on purpose. 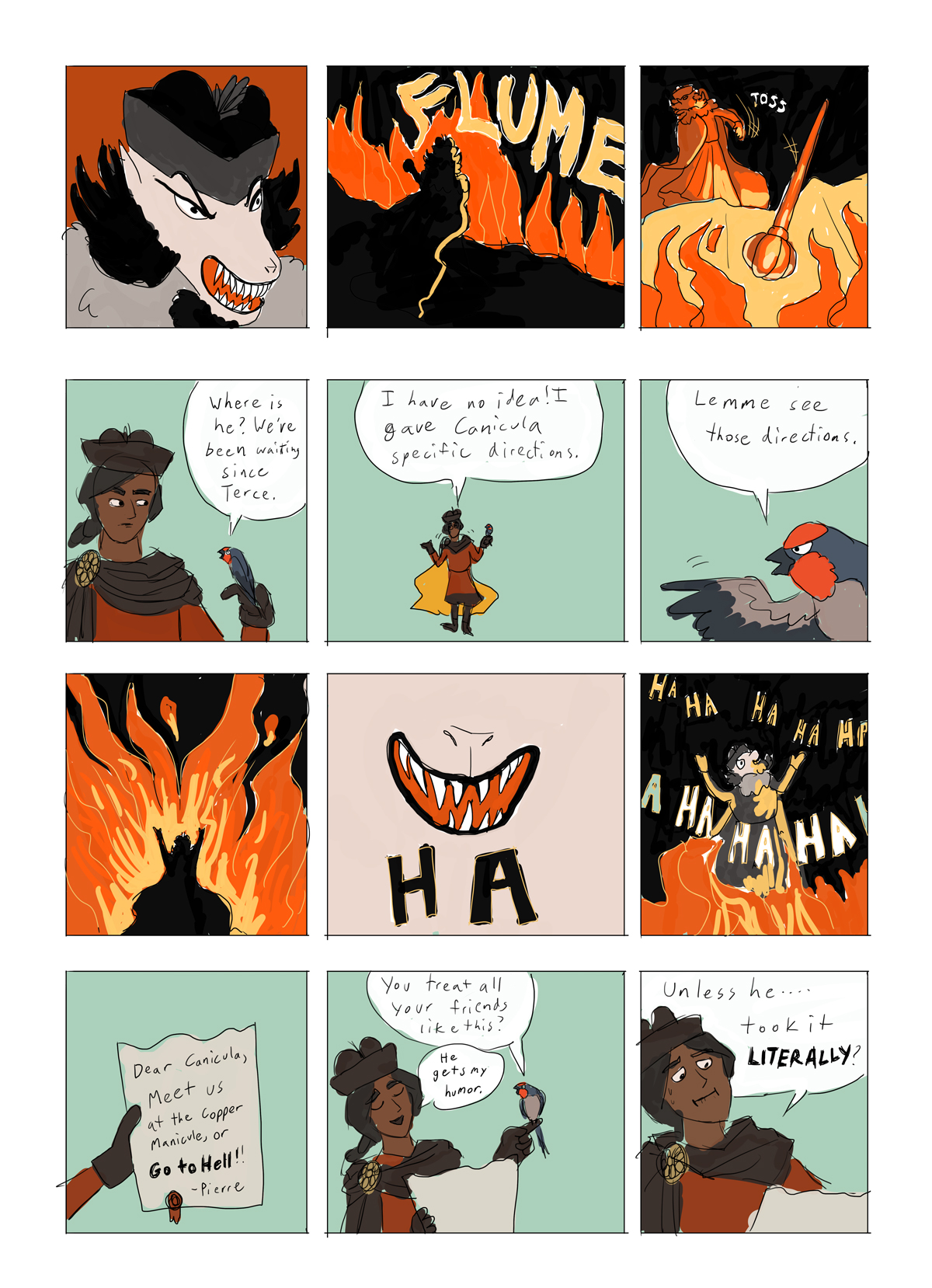 Here was my initial lineup of panels. The flat color backgrounds reassure me that I can totally be lazy about some panels if I need it! 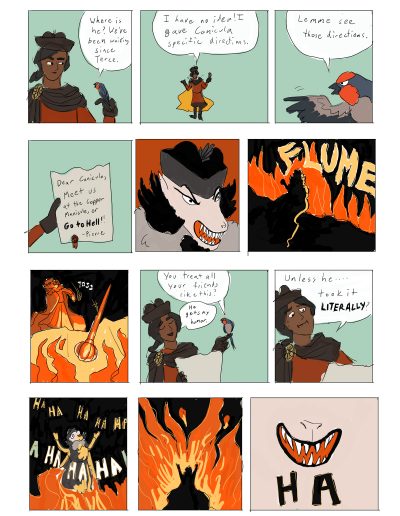 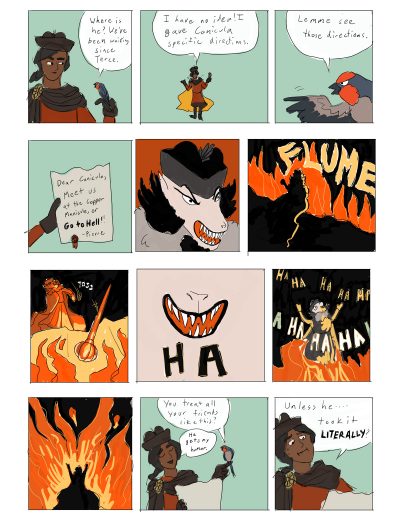 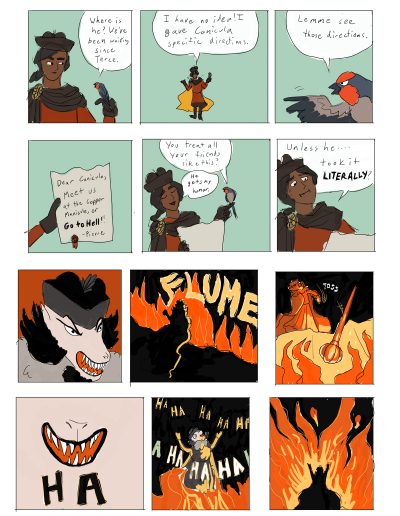 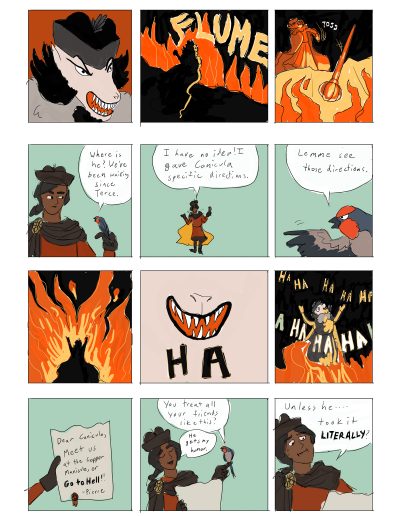 After we made the panels, we were asked to shuffle panels around and see how they affected story beats, seen above.  Depending on where I put that one big dramatic ‘Ha’ coming from Canicula’s mouth, the joke landed differently. Really nice to have ‘revision’ crop up in a class. Revisions are a constant for any professional visual artist. Normally revisions are shunned by shorter, casual classes, or classes more focused on self expression and art therapy, but Derek is a pro and wanted to show us all some pro techniques for situations that pros regularly handle. I really appreciated that.

So, Should My Comics Look Scribblier?
To my ultimate discomfort, it was revealed that my comics are indeed enjoyable if I just scrawl them out and not worry about smooth lines and coloring. So I’m still sitting with that and fidgeting. I don’t want personal pride to keep me from making more comics, but…Should I toss some of my previous art standards to the wind before I commit too heavily to something that might be keeping me from completing my projects?

You may be wondering, what’s the ah, kicker in all this? Well, after the class when I set out to find the cool panel design that had inspired me to be messier again, I found out that my interpretation of this panel of Derek’s work was in total error. The full composition of that panel actually looks like this: 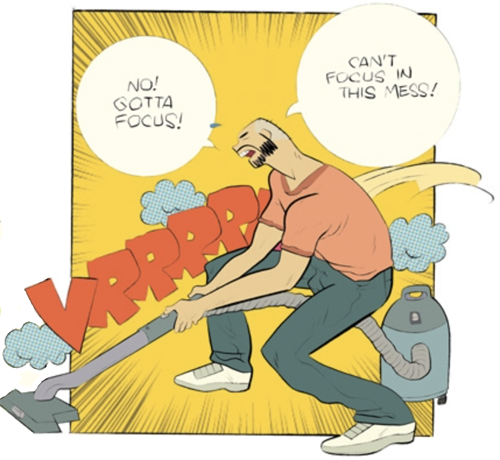 So yeah…The original panel art that caught my eye wasn’t cropped weirdly at all. I didn’t even perceive the original artwork correctly. I actually don’t know where my perception of this panel came from. Maybe the emailed newsletter cropped it. Maybe I looked at it on the Patreon banner. Who knows? Experimenting from a completely mis-intended crop but still coming to an interesting conclusion? You could say, I sure went on a tangent! (Tinned laugh track).

For more of Derek Ballard’s incredible comics work, check out his Patreon.

When to Letter a Comic
Comics are a synthesis of words and pictures. While they can vary between the extremes of a picture book vs. a wordless ‘silent’ comic vs. a full prose book, in general: Lettering is a necessary step for making your comic legible. Knowing when and how to do it is key for a clean comics-reading experience. Working with Derek reminded me that the order a comic is composed makes a difference and depends on the limitations and circumstances involved.

As a professional letterer, I will frequently get blank pages that need the script broken up and laid out on top of the artwork. Depending on the artist and the type of job, this has varying degrees of difficulty. Some artists are better at estimating the space for letters than others. Some script edits are wordier than others. Most of the time, I can fit any text using clipping, squishing the typeface by 6%, tightening the leading, and masking shapes behind character artwork. The other times, I query the editor, who changes the text. In very rare circumstances, the edit goes back to the artist to make room for the text. It’s far easier to change the layout or the text itself first, though! My work on the Riverdale Diaries was like this.

When localizing an existing comic into another language, I won’t have as much control over the shapes of speech bubbles. It’s my job to figure out the optimal font size in lieu of hard information from the original comic letterer. Sometimes I have to edit the speech bubbles themselves, but I avoid it whenever I can. I usually do localization with an FPO (For Placement Only) 90% opacity white layer between my text and the original comic before turning off the original lettering. This way I can line up the text on top of the original letters and more closely mimic the original comic’s feel. My work on Dog Man (Hombre Perro) was like this, and so is my work on the Spanish editions of Cat Kid Comics Club.

When I letter on my own, I letter immediately after thumbnailing and creating starter panels in InDesign. I can then export the pages as templates for drawing roughs. I always know exactly how much room my letters take up and, as a bonus, I can edit them without bothering an editor. In general, text is less flexible than art to move around. By lettering first I don’t have to guess how much space the words take up — I know for sure what room I have to draw my characters and settings! My work on Warlock’d, RAWR! Dinosaur Friends, and an upcoming third pitch are all made this way. It’s easier for me since I’m the entire creative team.