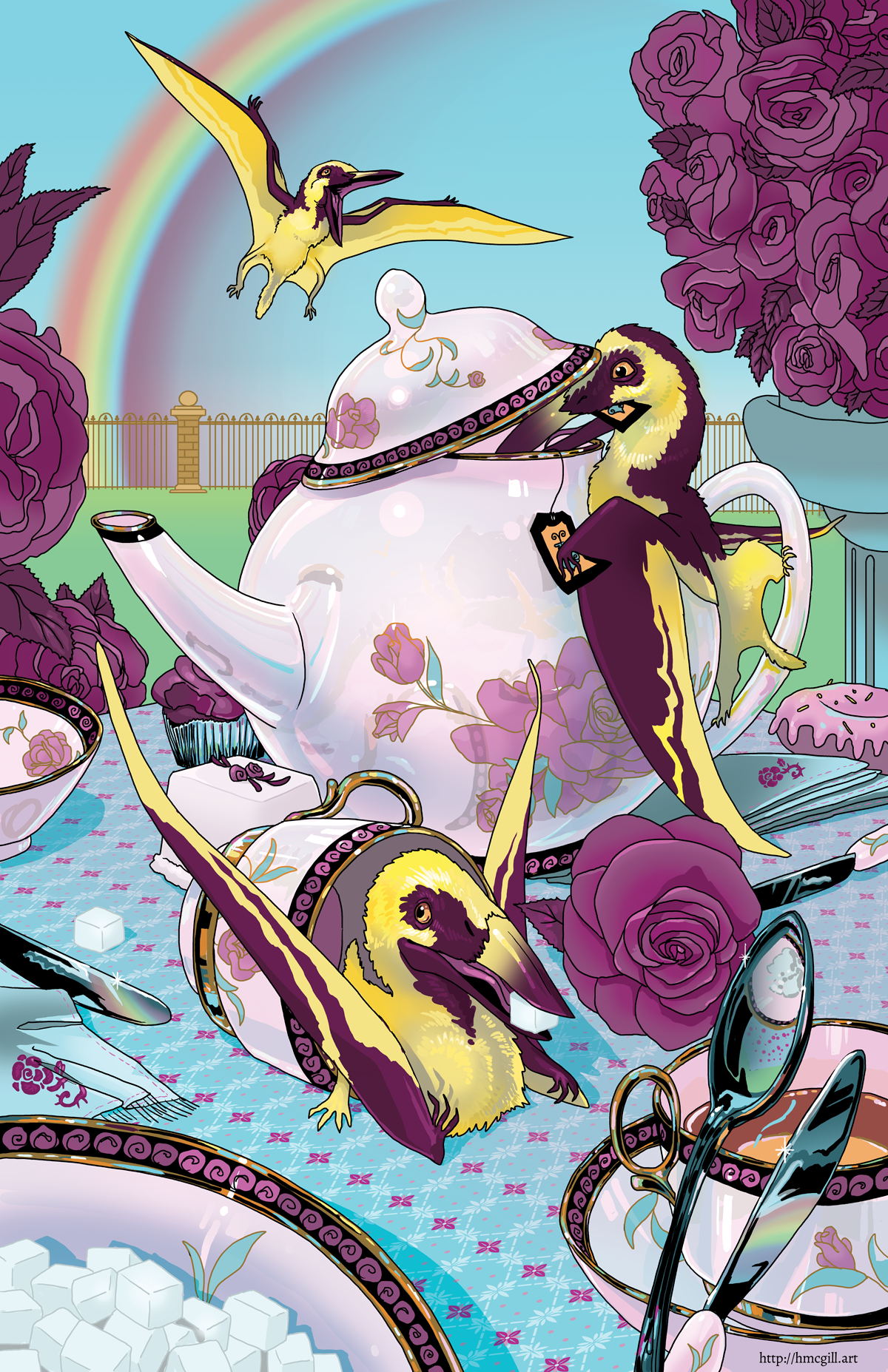 What Do We Do with Old Art that People Really Liked?
I’ve been doing conventions for awhile now and find them very personally fulfilling. I have so much fun setting up my display, rehearsing my sales strategies, and figuring out which things sell and why. Of course, my favorite thing to do is make merchandise in the first place. When I was starting out, I learned quickly that fancy prints are good for attracting people over to my table. I learned which paper and which printer to use to get the best-quality prints. There’s just something very nice about making a piece of artwork and then packaging it up to go to someone’s home. 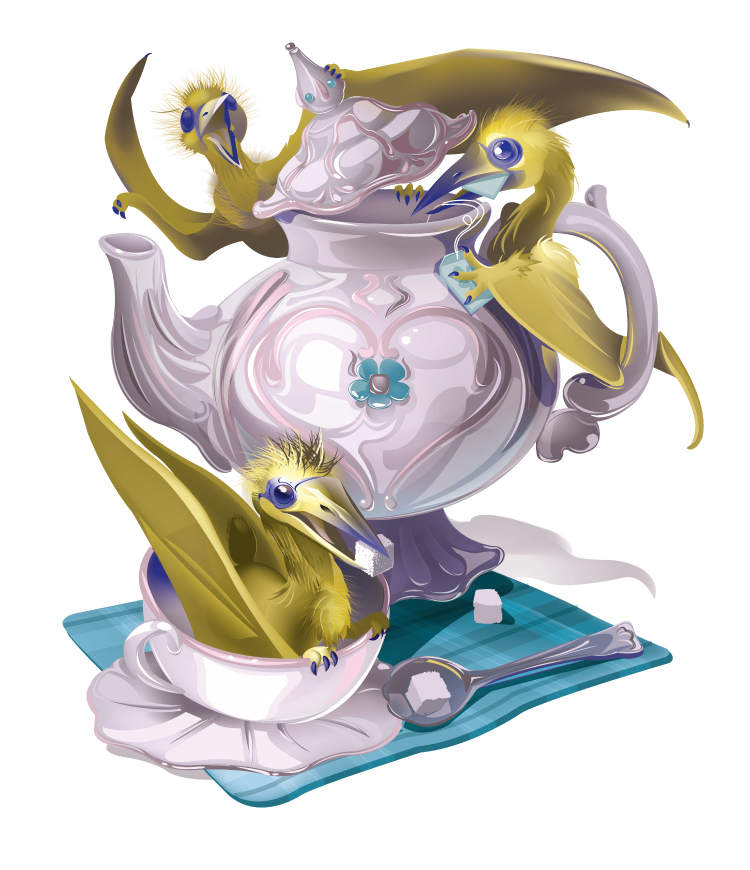 The original Ptempest in a Pteacup, circa 2013.
I did this in Adobe Illustrator with vector shapes because…I enjoyed pain.

Of all my prints that I’ve ever made, I’ve sold the most copies of Ptempest in a Pteacup. As much complex analysis of this piece as I want to do, the general consensus when I ask is that it’s ‘cute’ and ‘like nothing I’ve ever seen before’. I think the fantasy of owning a small prehistoric creature is a common one, or at least one that can be tapped into easily when observed for the first time. I think people liked the clear silhouette and ability to make out what was going on, and the weird/shiny surfaces.

It hurt to retire this print. It also hurt to sell more of them.

Why did I stop selling it? Well, it’s a very slow style rendered in vector graphics. I can’t easily or quickly replicate this style. The underdrawing also isn’t something I particularly adore. It looks kind of lumpy. That may have been part of its charm, but I’m not that artist anymore. I’m a different artist now! Finally, the size wasn’t large enough to fetch the higher prices I could see it selling for. This was an 8.5 by 11 print and the maximum I feel comfortable charging for that is $25. I wanted to make it an 11 x 17 so I could charge $40 per print. Most home printers can’t do 11 x 17 so I want the novelty of a larger print to factor into its appeal.

On the docket: A size update, and a style update. How do I do that while preserving the magic of the original? Do I truly understand what people liked about my own work? I’m going to ask this question over and over again. What do people like? How do I update something people like, but still have it reflect the original work? 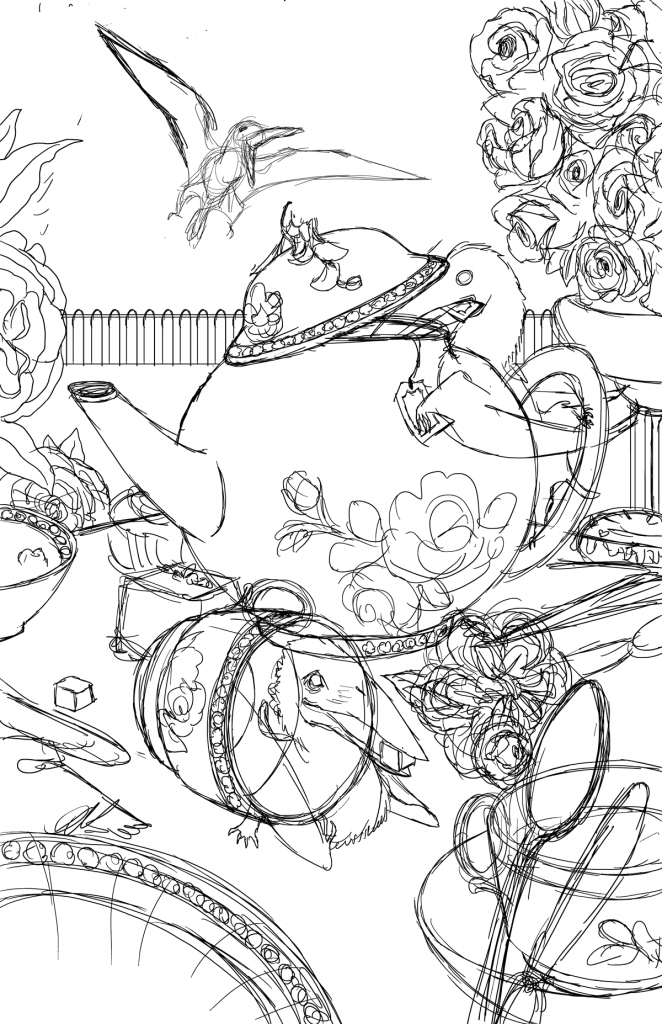 My 2nd or 3rd attempt at a sketch. Not sure where the earlier ones went, but this is where I landed.

My goals with this sketch were to fill out more of the page, make it more of a full illustration instead of a spot graphic, really justify the scene by printing full-bleed. I also wanted to make the perspective on the teacups and teapot cleaner, and just in general make the designs more elegant. I’m not the greatest at paleontological reconstruction but I felt like the pterosaurs deserved more care in their construction and posing. One of the pterosaurs was moved into the sky so that the viewer can see a whole body and how it flies. This should make it easier to imagine the rest of the other pterosaurs whose forms are hidden. 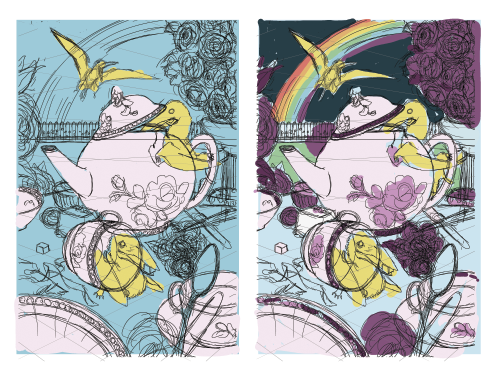 I only did a couple of color studies here. I knew I wanted to keep the pterosaurs yellow so that they’d jump out at the viewer as ‘odd’ when passed by. Purples and blues were there to support the yellow. I messed with the idea of a rainy background but sunny foreground, a fox’s wedding effect. Ultimately that felt a bit convoluted for this piece and so I moved on and vowed to keep it simple. The rainbow was a joke but of course that’s the thing about jokes…Perhaps my friends who join my drawing livestream dared me to leave it in! 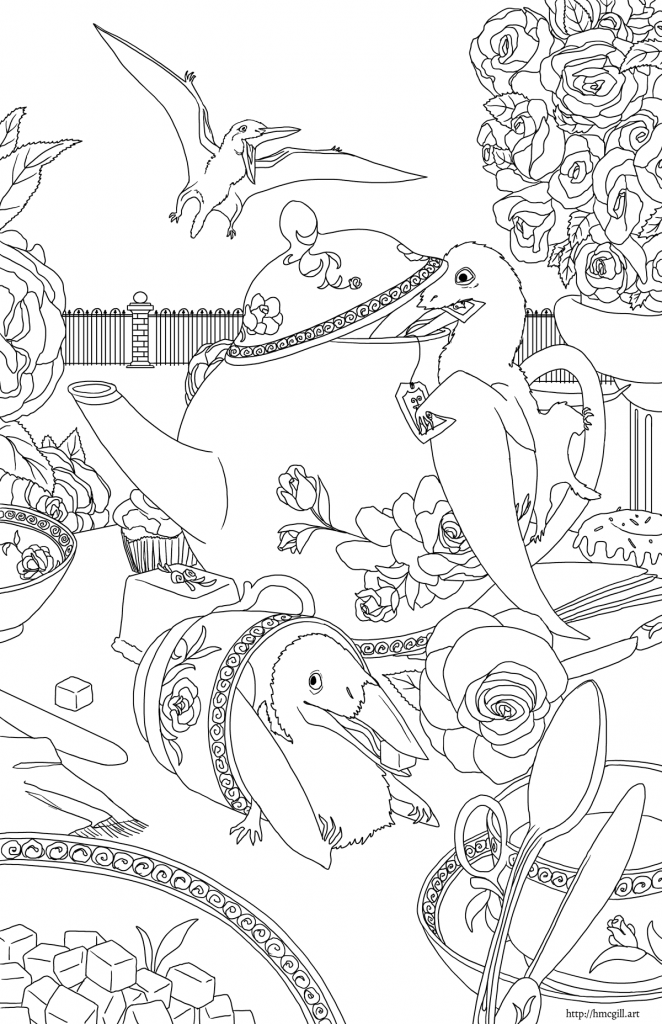 First iteration of lines. Available to freely color under a CC-BY-NC 3.0 License.

This, I felt, was pretty good. I’ve been getting faster and more confident in my lines. It’s approaching the balance I want between polished lines and getting the lines done at all. Right now I’m really enjoying the monowidth look done with Pencil tool. Maybe I’ll expand it with thinner lines on some of the surfaces in the future, but for now, I let colors do most of that work. 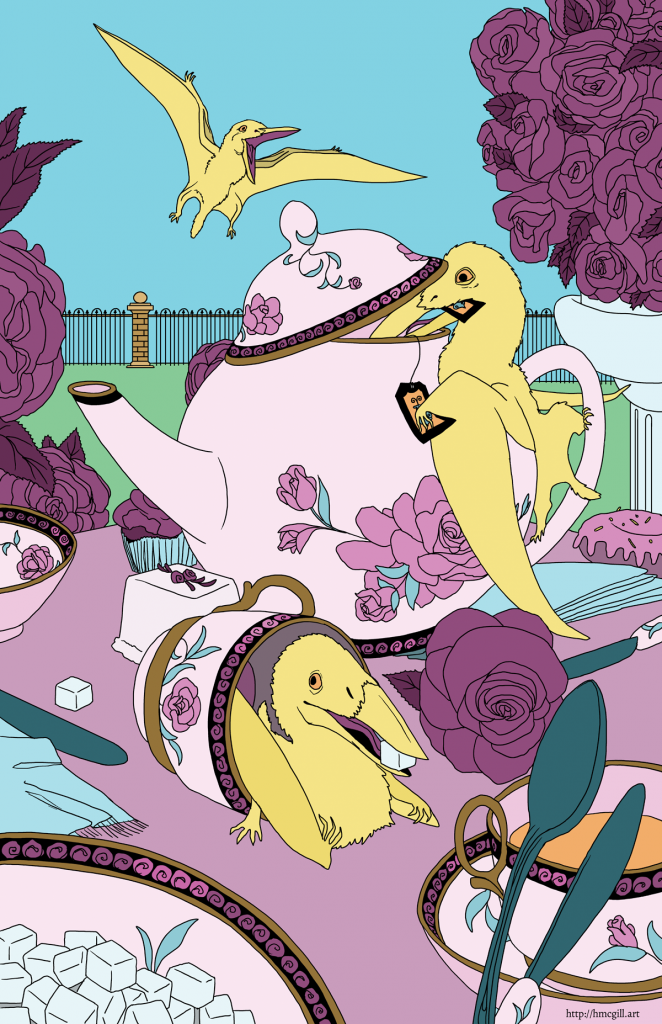 Without much of a variety of color studies, I explored my way through this scheme.

Some color schemes can be explored through. I would never do this with a client, but in this case I needed to do it for myself. For fun. Because that’s all art really is, right? I also started plotting where the highlights would go. Highlights function to draw attention to key parts of a piece. 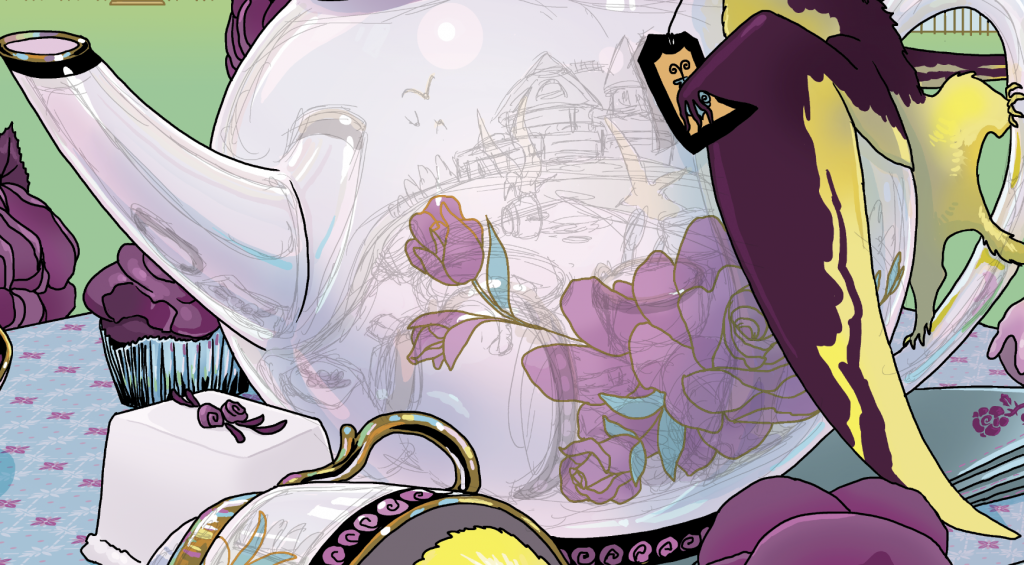 I also had a small adventure figuring out the landscape around the picnic.

What was I doing here? I was figuring out what would reflect on the teapot, and where. I think porcelain’s reflectivity is not too high so I felt comfortable blotting in colors and leaving it at that. One feedback I got on the original pterosaur piece was that the ‘shiny teapot’ was very desirable. I didn’t like how artificially shiny it was and so I sought a more sophisticated effect here. Which leads to designing a small Victorian garden that most people won’t see. That’s life. And art. 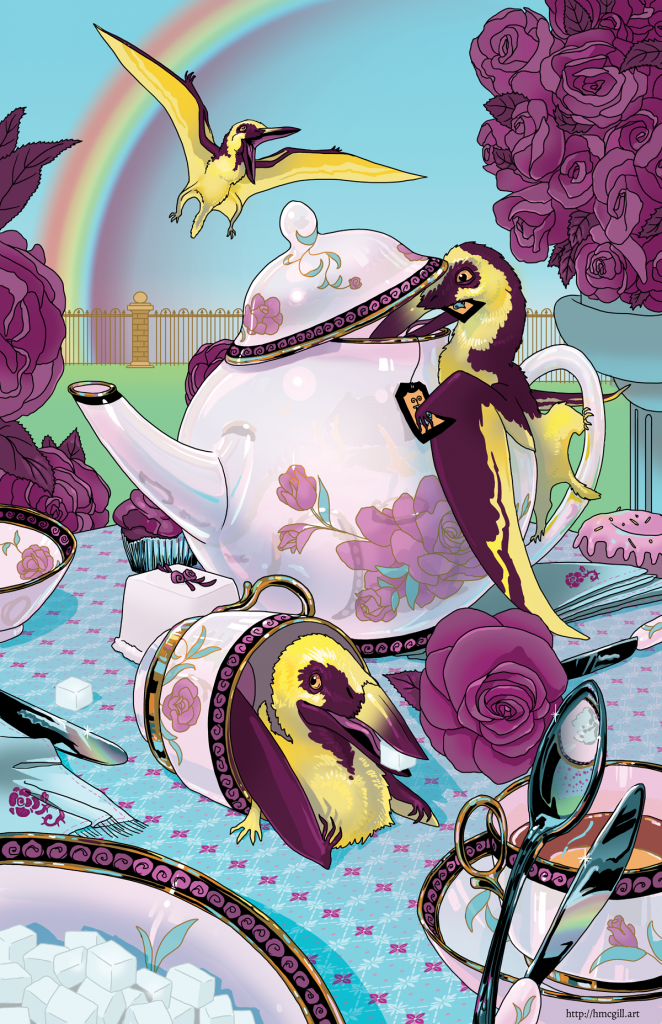 I sat on this for a couple of days.

And so, many layers of shading, rainbow gleams, research into confections, spot black applciation, and a custom repeating pattern for the table cloth later, this is what came out. Something still bothered me about this piece. I think it was the proportion of subject matter. The teaset seemed to be the main part of the piece. I wrestled with what to do. I didn’t want to add another whole pterosaur, because that would be too much pterosaur. It was like measuring out milk and sugar. The tea flavor still needs to come through. 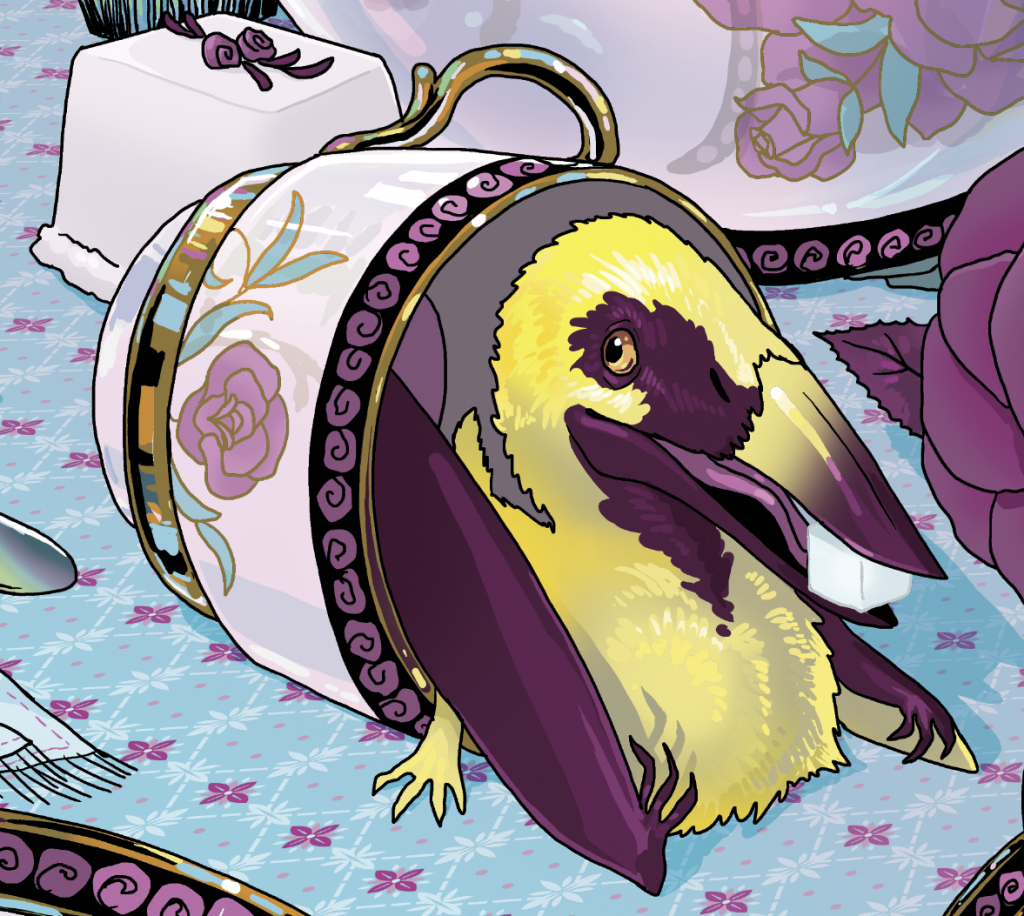 Hang on. This one’s looking a little cramped there. Where’s the wing going? 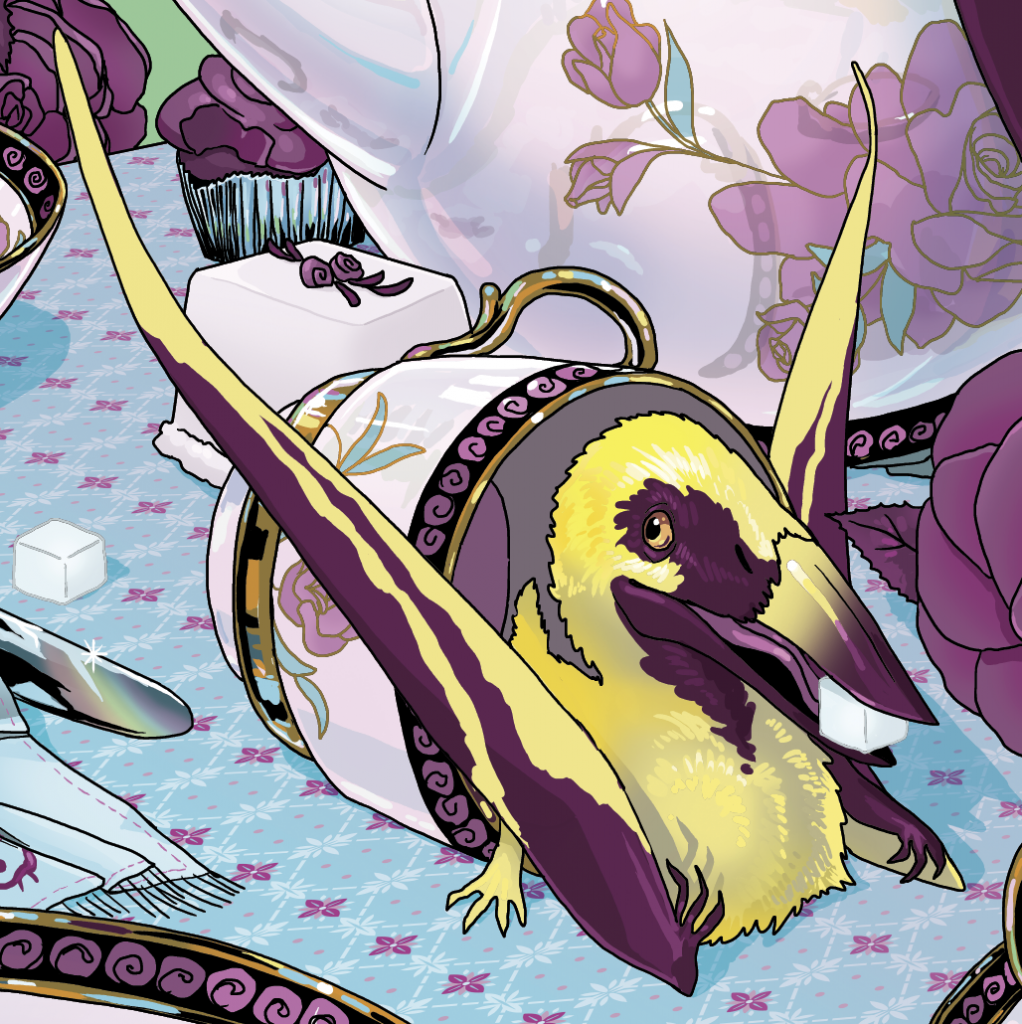 ← Amphiox, Continued You Don't Meet in a Tavern Promo →